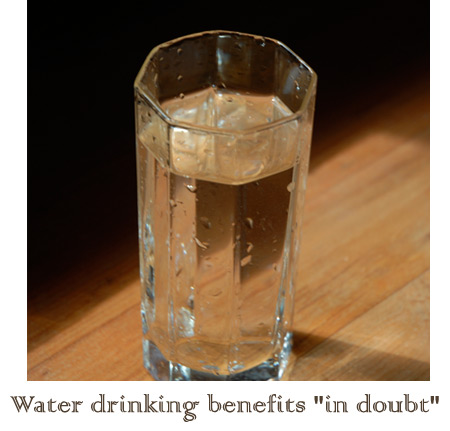 One of the biggest health mantras that have been followed from grandma’s time till date is “to drink a minimum of 8 glasses of water everyday”. However, a new research debunks this belief.

According to experts at the University of Pennsylvania, drinking gallons of water makes little difference to one’s health. The study carried out by Drs. Dan Negoianu and Stanley Goldfarb, notes that drinking lots of water may have a minimal health benefit.

The team worked the research to basically find if there was any substantiation in the myth that drinking water could flush out toxins in the body. Also, they wanted to find evidence on whether drinking lots of water accentuated one’s skin tone, and eased pain from headaches and such.

However, the team finally concluded that drinking lots of water really did not have much of an effect.

The researchers noted that while athletes, people living in hot, dry climates and those with certain diseases required greater intake of water, the average healthy person does not.

All the same, if you’re trying to lose some weight then drinking lots of water would be one of the ways that the weight loss can be achieved, found the researchers.

Thus the conclusion as per the researchers to the long drawn story could be that, yes do drink water to quench your thirst, but do not over do it simply because you think it is healthy.

The study titled “Just Add Water” will appear in the June issue of the Journal of the American Society of Nephrology.