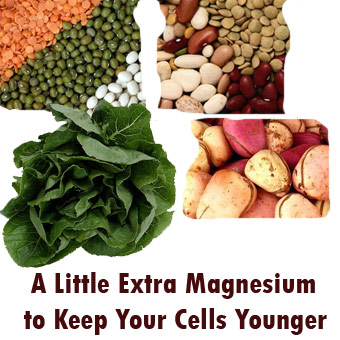 So what exactly do these food items offer that could perhaps result in the increased longevity of your cells? The answer is “magnesium”!

A new study states that magnesium deficit in the human diet could speed up the aging rate in human cells, which may thereby explain the association between any long-term deficiency and a higher risk of aging-related diseases.

However, in spite of all these benefits, the research has found that in the United States, over half the population is lacking in magnesium due to deficiencies in their diet, thereby making them more susceptible to fall prey to cardiovascular disease, hypertension, diabetes, osteoporosis and a few cancers.

The link between magnesium deficiency and these diseases was studied by Bruce Ames and researchers at Children’s Hospital Oakland Research Institute in California who examined the long-term effects of moderate magnesium deficiency on human fibroblasts, cells that offer a structural framework for many tissues in the body. The new study is published in Proceedings of the National Academy of Sciences.

The scientists cultured the cells for their entire lifespan, a period of three to four months, to copy the effects of a lack of magnesium in the study.

Through the analysis it was found that while the cells survived and divided normally under moderate magnesium-depleted conditions, they appeared to become older quicker as compared to cells grown in normal magnesium concentrations.

Adding, “We are now thinking that cellular consequences of magnesium deficiency may be driving long-term chronic disease.”

Ames and Killilea noted that the signs of increased cellular aging in magnesium-deficient cells may point towards the fact that the cells were in triage mode, saving resources for indispensable metabolic processes at the expense of long-term function.

With respect to diagnosing and treating chronic moderate magnesium deficiency, there is no good laboratory marker for this type of condition, and it tends to fly under the radar, maintained the scientists.

Lillilea added that there may be a possibility wherein an individual may be moderately deficient for a long time but be totally unaware about the same.