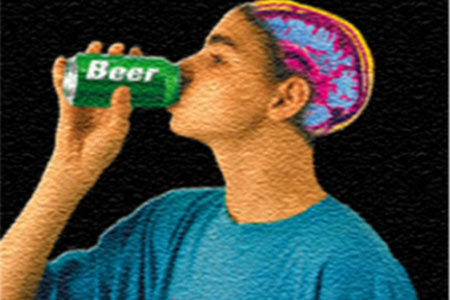 Have you realized that after getting drunk your brain wears a beer goggle and the brain has no ability to differentiate between scary or threatening situations and safe ones?

There is decreased sensitivity in detecting threats, and increased activity in brain regions involved in rewards, after consuming alcohol. This is the finding of a new brain imaging research published this week.

The team discovered that when an individual gets drunk, neutral circuits in the visual system and other parts of the brain involved in evaluating threats are mostly inactive as compared to when they were in a sober condition.

The brain’s reward system lowers the anxiety level and let’s intoxicated people move towards others at a party more willingly. Sometimes this combination also makes the inebriated to react in a rash way or stumble into some sultry position.

Researchers at the National Institute on Alcohol Abuse and Alcoholism in Bethesda, Md., used fMRI scanners to examine into the brains of at least 12 intoxicated volunteers and find out how alcohol relieves inhibitions and makes them behave indecently.

Researchers Jodi Gilman and senior author Daniel Hommer examined a dozen healthy participants to study the activity in emotion-processing brain areas when they were consuming alcohol. There were over two rounds of 45 minutes, wherein the participants received either alcohol or a saline solution intravenously. They were also projected to few images like that of fearful expressions.

The studies held before had shown the fact that the expressions of fear have shown a threatening situation and have activated certain regions in the brain. This similar group of people received both alcohol and placebo on two separate days.

These people felt very perky as their blood alcohol mounted to 0.08 percent, a stage regarded as legally drunk in most places. “Volunteers caught on pretty quickly to the placebo,” Gilman says.

A researcher from the team named Jodi Gilman says, “If you are not processing the fact that there’s a threat, you might be less cautious”. The team reported the findings in the April 30 Journal of Neuroscience

Marina Wolf, PhD, at Rosalind Franklin University of Medicine and Science, who was unaffiliated with the study says, “The key finding of this study is that after alcohol exposure, threat-detecting brain circuits can’t tell the difference between a threatening and non-threatening social stimulus.”

“At one end of the spectrum, less anxiety might enable us to approach a new person at a party. But at the other end of the spectrum, we may fail to avoid an argument or a fight. By showing that alcohol exerts this effect in normal volunteers by acting on specific brain circuits, these study results make it harder for someone to believe that risky decision-making after alcohol ‘doesn’t apply to me’,” Wolf adds.

Marina Wolf says “You know from observing people’s behavior that they do stupid things when they’ve had a few drinks. This new study is the first to give facts of how alcohol affects threat assessment in the brain. This study has been done for anti-anxiety drugs and for THC, the active ingredient in marijuana, with similar results”.

Now the next time around, you would think twice before you get high (drunk) and be consciously aware of your behavior in public, parties and people around you. So to avoid sticky situations and other alcohol effects you need to be cautious.