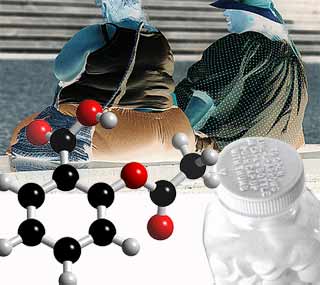 According to a study, Aspirin and other aspirin-like compounds also known as salicylates are beneficial to the healthy obese people in whom there is less production of insulin. Less production of the hormone insulin or insulin resistance is the cause of type 2 diabetes and is associated with obesity.

The glucose/sugar, protein and fats in one’s body cannot be broken down (metabolised) efficiently and completely if the insulin production is lower than normal. This leads to diabetes. Insulin resistance is often found in obese people who are more likely victims of diabetes. It has been discovered that aspirin and similar compounds (salicylate and its derivatives) lower the sugar level (serum glucose concentrates) in diabetics.

“The administration of a salicylate led to the lowering of serum glucose concentrations. These findings highlight the importance of further research on the possible therapeutic benefit of aspirin in the fight against type 2 diabetes,” said Jose-Manuel Fernandez-Real of the Institut d’Investigacio Biomedica de Girona and CIBEROBN Fisiopatologia de la Obesidad, Spain, and the lead author of the latest study.

The research constituted of evaluation of 28 participants who were administered with various triflusal which is a derivative of salicylate. The average age of the participants was 48 years and all of them were obese as per their body mass index (BMI) which in their case was 33.9. A person is known to be obese when her/his BMI exceeds 30. The treatment was divided into 3 periods each of 4 weeks. During this treatment the participants were given dosages of 600 milligrams and 900 milligrams of triflusal or a placebo everyday. A placebo is a supplement not containing medicine given during researches only to test the psychological effects taking place in the participants.

It was inferred that the metabolism of serum glucose significantly increased with the increase in doses of triflusal. However the insulin sensitivity did not change which was not expected by the researchers.

The researchers further carried out the study in labs on islets of Langerhans, the insulin producing cells which are present in pancreas. The study was carried out on the cells of mice and humans to confirm the effect of triflusal. The results were affirmative confirming that the production level of insulin indeed increased.

Fernandez-Real notes, “Aspirin therapy has been recognized to improve glucose tolerance and to reduce insulin requirements in diabetic subjects. To our knowledge, this is the first study to show that salicylates lowered serum glucose in non-diabetic obese subjects. We believe that this effect was due to a previously unsuspected increase in insulin secretion rather than enhanced insulin sensitivity.”

The study has been accepted by the ‘The Endocrine Society’ which will be publishes in their July issue of Journal of Clinical Endocrinology & Metabolism under the title ‘Salicylates increase insulin secretion in healthy obese subjects’.