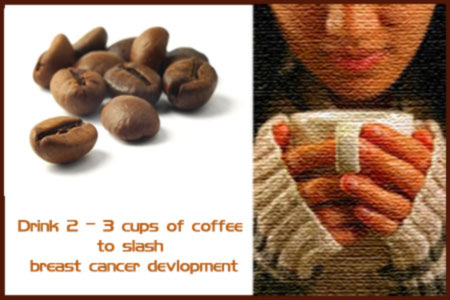 A research conducted by Boffins at Lund University and Malm University in Sweden, has discovered an extremely way to reduce the risk of developing breast cancer, or delaying its inception. The intake of two to three cups of coffee a day would trim down the development of breast cancer. The study says that coffee is related to the female sex hormones.

Researcher Helena Jernstrom and her colleagues surveyed the coffee-drinking habits of about 460 breast cancer patients. There is a possibility that the beverage has shielding effects which are dependent on variation in a gene called CYP1A2. There are various components of coffee which can modify the metabolism so as to acquire a configuration of different estrogens in a woman.

230 women had a variant called A/A and others had either A/A or C/C of the gene CYP1A2. This gene codes for an enzyme which metabolises both oestrogen and coffee. The research has also found that the fairer sex acts as a helping hand as caffeine in the coffee obstructs the increase of cancer cells.

Helena Jernstrom said, “Those women who had one of the C variants, and who had drunk at least three cups of coffee a day, developed breast cancer considerably more seldom than women with the A/A variant with the same coffee consumption. Their cancer risk was only two thirds of that of the other women.

“A/A women who had drunk two or more cups of coffee a day received more ambiguous help from their coffee consumption. On the one hand, their cancer appeared considerably later than among women who had seldom or never drunk coffee at a mean age of 58 years instead of 48 years, unless they had taken hormone replacement therapy for menopausal symptoms,” she added.

It is evident that every year more than one million women across the globe are diagnosed with breast cancer. While US and the Netherlands are found to have greater prevalence, China has the lowest occurrence and mortality rate of the disease.

The research has been published in the journal Cancer Epidemiology, Biomarkers and Prevention.