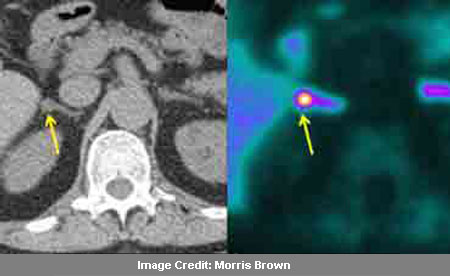 High blood pressure incidences are strikingly common in the U. K with a major causal factor being something known as Conn’s syndrome. A new test to detect blood pressure caused by the latter has been unleashed by scientists from the Cambridge University.

Though Conn’s syndrome is difficult to treat, it may be restored once it has been diagnosed correctly. This new test involved scanning the abdomen by means of positron emission tomography by using x-ray computer tomography technology. It is also known as a PET-CT which is used in cancer prognosis too.

Morris Brown, Professor of Clinical Pharmacology at the University of Cambridge, who led the study commented, “We were excited to see our technique work so well, and shortcut the delays and discomforts associated with the alternative test. We’re using PET-CT on our patients already, but we also plan a larger study to work out who will benefit the most.”

The experts created a unique radioactive tracer namely 11C-metomidate that apparently illuminated the adenomas mainly responsible for Conn’s syndrome, in the scan. Adenomas are tumors developed in adrenal glands which accelerate the expression of a blood pressure control hormone called aldosterone. Sometimes, these are eliminated through surgery or via drugs that impede the influences of the latter.

This test which lasted for approximately 45 minutes supposedly located the adenomas in most of the 44 patients trialed. Such PET-CT scans could also be used to gauge the presence of tumors in elderly patients without the need of lengthy procedures. The analysis is published in the Journal of Clinical Endocrinology and Metabolism.