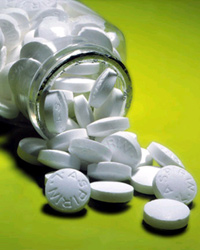 A new research suggests that Aspirin and other painkillers reduce the risk of developing an enlarged prostate. The condition is known as benign prostatic hyperplasia.

The research which was conducted at Minnesota’s Mayo Clinic examined the impact of taking Non Steroidal Anti-Inflammatory Drugs (NSAIDS). Previously aspirin had been linked to a reduced rick of prostate cancer.

The researchers led by Jenny St Sauver, found NSAIDS cut men’s risk, but did not recommend all men take the medication. NSAIDs are already taken by many middle-aged people to prevent heart disease or reduce arthritis symptoms.

However, they are associated with possible side effects, such as an increased risk of stomach ulcers, disruption of the blood clotting system and asthma attacks in susceptible people.

“We would not recommend that every man go out and take aspirin, but if they are already taking it regularly for other reasons, our findings suggest another benefit as well,” St Sauver said. He said the reason why NSAIDs cut the risk of an enlarged prostate is unclear.

Prostatic hyperplasia is a condition that affects the prostate gland in men. The prostate is a gland found between the bladder (where urine is stored) and the urethra (the tube urine passes through).

As men age, the prostate gland slowly grows or enlarges. As the prostate gets bigger, it may press on the urethra and cause the flow of urine to be slower and less forceful.