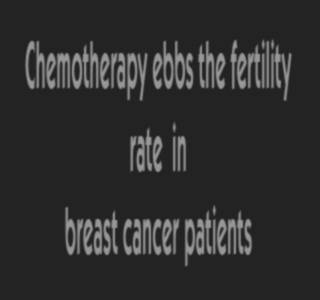 The findings are yet to be presented at the annual meeting of the American Society of Clinical Oncology in Chicago.

The research was conducted in the markers of ovarian reserve in 20 pre-menopausal breast cancer patients who had been operated with adjuvant chemotherapy and they were diagnosed one or two years earlier and did not show any sign of recurrence. Then these 20 patients’ group was judged against a “control” group of 20 aged women who showed no past records of the disease.

“These findings may have important implications for women who are interested in having children after receiving chemotherapy,” said Ann Partridge, MD, MPH, of Dana-Farber, who led the study. “Studies that track breast cancer survivors following treatment are needed to determine the predictive value of these tests for pregnancy.”

Five tests were conducted on the second, third and the fourth day during the menstrual cycle to check the ovaries’ physical condition, hormone levels and a compound entailed in the menstrual cycle. From four of the five tests, the breast cancer survivors suffered worse ovarian reserve compared to the control group. And the remaining test showed no prime changes and difference between the two groups.