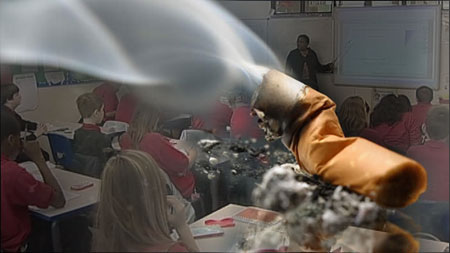 High-school children are often known to undergo a lot of stress in terms of peer-pressure in various issues, academic pressure, and a lot of stuff that often parents don’t know. While parents cannot practically be there with their children throughout the school time, the complete process of inculcating values and good habits in a child is left to the teachers during school hours.

What will happen if a student is exposed to a positive environment in the school itself? Obviously, there are less chances of the child getting diverted to wrong side of life. This is exactly the in smoking as per a new research. A new research published in BMC Public Health, an open access journal confirms that a school which has teachers who are successful in building a positive environment in school has fewer chances of students taking up smoking.

The research was conducted by surveying 5902 high-school children from 24 schools in Scotland. “The social environment of schools, in particular the quality of teacher-pupil relationships, pupil’s attitude to school and the school’s focus on caring and inclusiveness, all influence both boys’ and girls’ smoking habits,” explains lead author of the study Marion Henderson of the Medical Research Council Social and Public Health Sciences Unit, Glasgow.
This comes as one of the most important research in today’s times as it has been noted that while there has been a decline in the smoking adult population; there was no matching decrease in the percentage of adolescent smokers. Out of the surveyed mass of high-school students, 25 percent of males and 39 percent of females belonging to the age group pf 15-16 have been reported to smoke regularly or occasionally.

Dr. Henderson and his colleagues note that the current school-based anti-smoking interventions are mostly ineffective. “Most focus on individual characteristics rather than the environment in which adolescents smoke. Our research has shown that this environment acts to either encourage or discourage smoking.”

The researchers explain a term called as ‘school effects’ which are school-level variations in smoking that remain after the individual influences like whether pupils smoke before joining, whether they live with both parents and their amount of personal spending money, are considered. It was found that the school effects were clearly determined by student’s attitudes towards school, the quality of teacher-pupil relationships and school-level affluence.

According to Henderson, “Our results suggest that investing in the social environment of schools and endeavouring to make school a positive experience even for less academically able pupils may have the potential to reduce smoking rates, particularly for boys. This provides some of the strongest evidence to date to support the Health Promoting School concept, and for the first time looks at how this differs by gender.”

After all the time spent at school is always the most significant and cherished part of our lives. Also since children are the future citizens of the country, teachers can definitely lend some support to put children on the right track by putting in some extra effort for a bright future.