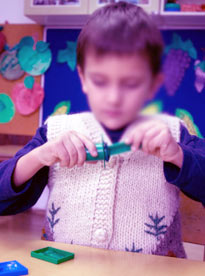 Researchers have reported that fever can temporarily unlock autism’s grip on children. The findings of this study could help to throw some light on the roots of autism, further providing clues for treatment.

The study said that fever tends to restore nerve cell communications in regions of the autistic brain. This restores a child’s ability to interact and socialize during the fever.

People with autism spectrum disorders suffer in varying degrees from limited social interactions, lack of verbal and non-verbal communication and other abilities.

According to Dr. Andrew Zimmerman, a pediatric neurologist at Baltimore’s Kennedy Krieger Institute, who was one of the study authors, “The results of this study are important because they show us that the autistic brain is plastic, or capable of altering current connections and forming new ones in response to different experiences or conditions.”

The study was based on 30 children with autism aged 2-18 who were observed during and after a fever of at least 100.4 degrees Fahrenheit.

More than 80 percent of those with fever showed some improvements in behavior during it and 30 percent had dramatic improvements, the researchers said. The change involved things like longer concentration spans, more talking, improved eye contact and better overall relations with adults and other children.

Zimmerman’s team said the fever effect had been noted anecdotally in the past by parents and doctors.

Zimmerman said that while there currently is no definitive medical treatment, speech and language therapy started as soon as possible after diagnosis “can make a significant difference.”

He called the fever research, headed by colleague Laura Curran, “an exciting lead” that could help point the way to a treatment that would reconnect the autistic brain. He said the fever effect was believed found only in children, whose brains are more “plastic” than those of adults.