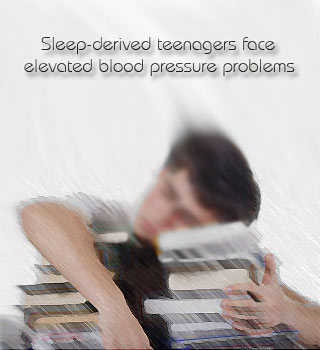 Teenagers these days are preoccupied by their mobile phones, computer games and iPods. These gadgets disturb sleep patterns among them. A latest study reveals that sleep deprived teenagers or those with bad sleeping habits may face risks of elevated blood pressure. Tired teens are thus risking their heart as this could lead to cardiovascular diseases later in life.

Pediatrician Dr. Susan Redline, professor of medicine and pediatrics and director of University Hospitals Sleep Center of Case Western Reserve University in Cleveland, Ohio, along with her team closely observed the association between not getting enough sleep and blood pressure in healthy adolescents.

The Cleveland Children’s Sleep and Health Study was based on the cross-sectional examination of sleeping patterns of 238 teenagers. Subjects (123 boys and 115 girls) were between 13 to 16 years of age with an average age of 14 years. An evaluation of sleep efficiency and duration where teens completed a daily sleep log and wore a wrist device that measures movement to determine sleep and wake cycles was carried out.

All subjects were healthy and did not suffer from any kind of sleep-disordered breathing or other known health conditions. They also had to spend one night in a clinical sleep lab. In the lab, the staff measured the blood pressure nine times throughout the participant’s visit in addition to assessing sleep with standard devices.

Susan, the senior author of the study, commented, “Our study underscores the high rate of poor quality and inadequate sleep in adolescence coupled with the risk of developing high blood pressure and other health problems. We also found that low sleep efficiency may be more consistently associated with pre-hypertension than a shorter sleep period.”

The researchers discovered that healthy teens who slept less than 6.5 hours a night were 2.5 times more prone to high blood pressure in comparison to those who slept longer. This was even after the results were adjusted for gender, body mass index (an indicator of overweight or obesity), and socioeconomic status.

As against those who had higher sleep efficiency, adolescents with low sleep efficiency that is those who found it difficult to sleep at night or woke early had an average 4 mm Hg higher systolic blood pressure. They were also more likely to face prehypertension or hypertension than their peers who slept well.

Though it may seem trivial, an awareness of this issue must be created among teenagers. There is an increased risk for stroke and other cardiovascular diseases in later stages of life if high blood pressure is left untreated.

The online August 19, 2008 issue of Circulation: Journal of the American Heart Association has published this study in ‘Sleep Quality and Elevated Blood Pressure in Adolescents’.