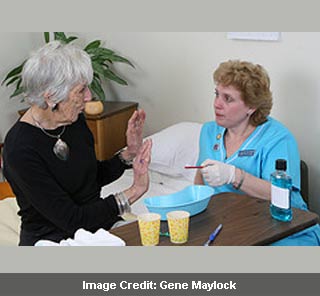 The oral health of an individual seems to play a significant role in maintaining good health. A team of investigators have now found that people with poor oral health have heightened risk of developing pneumonia as well as cardiovascular and periodontal diseases. In fact, those suffering from dementia may remarkably benefit from a tailored approach to dental hygiene.

In this study, an oral hygiene approach called Managing Oral Hygiene Using Threat Reduction (MOUTh) has been specifically tested on dementia patients. Scientists came up with around 15 strategies and techniques to help reduce threat perception and make the patient feel more comfortable not only before but also care is provided. These strategies supposedly include approaching patients at eye level if they are seated, smiling while interacting, pantomiming, and guiding patients to perform their own care by placing a hand over the patient’s hand and leading.

“Think of the hippocampus, cerebral cortex and amygdala as being in the woods. In a person with dementia, the path in the woods is blocked with tumbleweeds and the message from the cortex and hippocampus can’t get to the amygdale,” explained Rita A. Jablonski, assistant professor of nursing, Penn State.

Dementia patients are often unable to distinguish low or non-threatening situations from highly threatening situations. Probably because the parts of the brain that control threat perception, such as the fight, flight or freeze responses, begin to deteriorate. Patients with dementia possibly react to something as intimate as a nurse brushing their teeth as a perceived threat.

“To my knowledge, we are the only nurses in the country who are looking at ways to improve the mouth care of persons with dementia, especially those who fight and bite during mouth care,” said Jablonski. “Our approach is unique because we frame resistive behavior as a reaction to a perceived threat.”

The current study included 7 people who were diagnosed with moderate or severe cases of dementia. The MOUTh technique was applied on these subjects for a period of two weeks. Authors then recorded the state of the patients’ mouths and their overall reaction throughout the study. Initially all the patients were seemingly declared to have poor oral health by the Oral Health Assessment Tool. It was observed that 8 categories concerning oral health were purportedly scored between zero and two. While the average score for the subjects at the start of the study appeared 7.29, by the end the average score was 1.00.

The study is published in the current issue of Special Care in Dentistry.