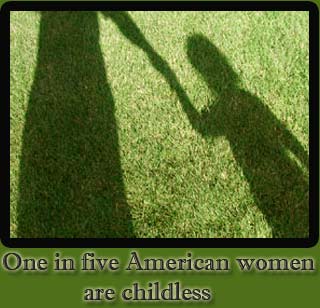 A shocking discovery by the American government reveals that modern American women are twice as likely to remain childless as 30 years ago. A survey by the US Census Bureau showed that one in five women in America is remaining childless throughout their lives. According to the report, American women these days are either choosing not to have children or are facing a steep decline in fertility.

Allowing an annual state wise fertility analysis, data from a massive sample of 3 million addresses across the US in the American Community Survey has been used for the first time. The report gives a statistical understanding of fertility issues.

The report’s author, Jane Dye, mentioned, “The proportion of childless women has been increasing steadily by about one percentage point a year. It used to be sort of expected that there was a phase of life where you had children, and a lot of women aren’t doing that now.”

The report claims that nearly 20 % of women aged between 40 to 44 years have no children. Also women in that age group who do have children have an average of 1.9 children much less than the mean average of 3.1 children in 1976. Surprisingly, the study found that there was a high likelihood for women with advanced degrees to be childless. The data suggested that among the women with graduate or professional degrees, 27 % are childless in comparison with 18 % of women who did not continue their education beyond high school.

A previous study by Ms. Dye in 2006 reported consistent figures. Ms Dye asserted that with a slow annual change, American families are continuing to transform with women of the baby boom generation. With California having the highest number of foreign-born new mothers, an average one in five new mothers in 2006 was foreign-born.

The present study has found a strong difference between different ethnic groups. Figures show that Hispanic women between 40 to 44 years have an average of 2.6 children compared to a national average of 1.9 children. Nearly one-fourth of non-Hispanic women namely white are childless.

The report contributed the decision to complete education before starting a family as a major factor for this trend. It states that the modern American women are reflecting the opportunity cost model in their decision to have a child.

Easy Tips to Get Pregnant Fast with Yoga