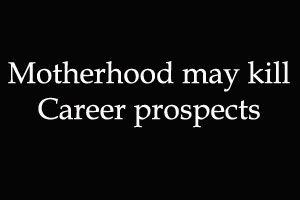 It is pretty common for modern women nowadays to prioritize their careers rather than having a child. This could have a logical reference as a latest study has discovered that motherhood could in fact kill the prospects of a growing career.

A study conducted by the Australian Public Service Commission analysed the career growth in approximately 800 female public servants who took maternity leave in 2000-01. They examined if the employees had been promoted by June 2007.

The commission mentioned, “The latter group (women who did not take maternity leave) is significantly more likely to have been promoted by June 30, 2007. The figures may also be distorted by the possibility that women having children are at a relatively more senior classification already and simply have less scope for promotion.”

Director Anna McPhee, of the Equal Opportunity for Women in the Workplace Agency asserted, “The data documents what women already knew – having a child brings a great opportunity cost to their career. I think it is certainly concerning that women are being discriminated against because of their family situation”

A surprising revelation of the study was that nearly 65 % of women who had taken a maternity leave were not promoted even 6 years after the leave as against 42 % women who were without children and also did not receive a promotion over the same period of time.

Although there was no specific analysis of the cause of disparity among such women, the commission assumes that at a senior level it is even more difficult to find part-time jobs. Additionally, the study suggests that post maternity women themselves may not want to look for more senior jobs. This can be ascertained to hurdles faced in balancing family commitments with the increased demands of relatively senior positions.

Marie Coleman, spokeswoman for the National Foundation for Australian Women in agreement indicated that mothers were more likely to miss out on promotions because of their inability to take up posts like a senior manager. There was also a greater likelihood that they would not chip in extra hours at work or work part time.

The agency’s report however reveals that a greater responsibility at work, promotion and increased independence were still some of the common desires among working mothers.