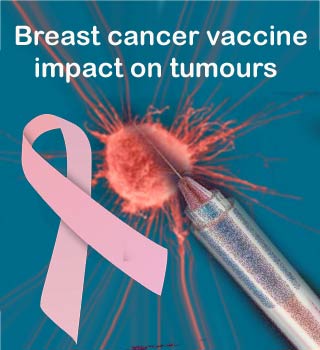 Successful in their trails on mice that had HER-2-positive tumors, researchers at the Wayne State University suggest that even cancers resistant to current anti-HER-2 therapy could be treated with this vaccine without any toxicity.

Normal cell growth is promoted by HER-2 receptors which are found in low amounts on the breast cell. However HER-2 positive breast comprise of additional receptors that may promote a particularly aggressive type of tumour which affects nearly 20-30% of breast cancer patients.

Wei-Zen Wei, Ph.D., a professor of immunology and microbiology at the Karmanos Cancer Institute, remarked, “The immune response against HER-2-positive receptors we saw in this study is powerful, and works even in tumors that are resistant to current therapies. The vaccine could potentially eliminate the need to even use these therapies.”

The new vaccine apparently targets HER-2-positive tumor cells. Wei’s study of the vaccine involved naked DNA. These are genes that produce the HER-2 receptor, and an immune system stimulant. On administering this vaccine to the leg muscles of mice that contained the HER-2-positive tumours, the researcher found that the gene produced a large quantity of HER-2 receptors. This in turn activated the immune system.

Cancer puts up many hurdles in the treatment process as it is very different from other types of infections. It also progresses very quickly. The research promises hope for breast cancer patients. The vaccine will supposedly create antibodies that will destroy any cancer cells currently inside the body as well as any new cancer cells that may appear.

However researchers indicate further studies are required to determine if the findings will bear out and apply to humans. Scientists are hopeful that the vaccine should soon help in halting the recurrence of cancer or in the treatment of women with resistant forms of cancer.