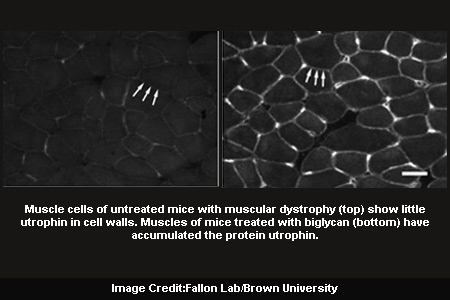 Patients suffering from muscular dystrophy have some good news stored in this piece of information. Scientists have put forth a unique therapy based on a natural human protein to considerably slow muscle damage and boost function. This therapy was tested on mice engineered with same genetic mutation as boys with most common form of muscular dystrophy.

It appears that the protein, biglycan restores the muscle-strengthening presence of a protein termed utrophin. When biglycan is delivered to the bloodstream it apparently draws utrophin to the cellular membranes of muscle cells. It is known that utrophin aids the cells to build and retain their strength. In an experiment, experts registered a 50 percent reduction in ‘centrally nucleated’ fibers within the muscle tissue of biglycan treated mice. Fibers are considered as indicators of recent tissue damage and repair, so a decline in them enables the muscle tissue to suffer less damage. While conducting the research, mouse muscles were made to undergo a standardized stress test. All through the test muscles were stretched and caused to contract.

Eventually, the test weakens even healthy muscle, but in the tests triggered by scientists, the muscles of muscular dystrophy mice treated with biglycan lost their strength 30 percent more slowly than similar mice who were untreated. Justin Fallon, professor of neuroscience at Brown University and the senior investigator and colleagues witnessed a 50 percent increase in some muscles. So mice treated with biglycan possibly hold on to more of their function for a longer time. The effects of treatment with biglycan presumably lasted through all the months of testing.

The research was published online on December 27 in the Proceedings of the National Academy of Sciences.