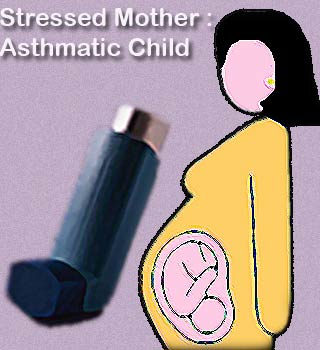 In case you are an anxious mother may be calming your nerves could do more than just relaxing you. A new research by experts at the Bristol University reveals that children who are born to mothers who had a stressful pregnancy are at a higher risk of developing asthma.

The research goes on to say that the more anxious the mother, the higher is the susceptibility of the baby born to develop asthma. Scientist at the Bristol University examined nearly 5800 children and their parents. The mothers were monitored from early pregnancy until their child was 10 years old. A thorough examination of these women showed that the mothers who were very anxious had 65% more chances of giving birth to children who later developed asthma.

As part of the study the pregnant women were asked about how they felt in the 18th and 32nd week of their pregnancy. They were then asked to rate their stress level. The researchers later tested their children for asthma when they were about 7 and half years old. Nearly 13% of the children tested positive for asthma

Researchers found that the chances of develpoioing asthma were 17% higher in children whose mothers claimed to be stressed at 32 weeks. Stress at 18 weeks showed much lower risks at 14% chances of developing asthma. Researchers additionally mention that for women who were extremely stressed, the risks of their babies suffering from asthma was upped by nearly 65%. The scientist thus concluded that on average stressed or anxious pregnant mothers have 17% higher chances of having asthmatic children.

The research has also led experts to believe that those mothers who felt highly stressed late in their pregnancy were most likely to have a child who developed asthma as against women who felt the same in early stages of pregnancy. They link these findings to a hormone that may be affecting the immune system. In the course of the study, the scientists discovered that stress in pregnant women appeared to have disturbed the levels of the hormone cortisol in their body.

Known as the stress hormone, cortisol may be actually changing the immune system of unborn babies as a result of maternal stress. Along with causing asthma, the researchers also mention that stress in expectant mothers has an impact on their child’s overall future health.

Recent reports show that over 5 million people in Britain suffer from UK, including more than a million children. All we’d say is if you are ready to bring a new life into this world, just follow your physician and relax!

These findings were presented at Annual Congress of the European Respiratory Society (ERS) in Berlin.