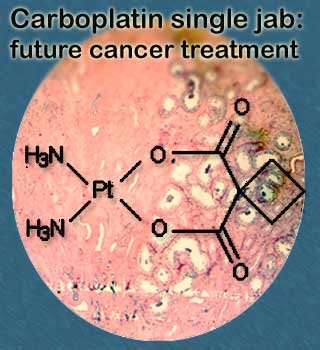 Well, technology it appears may just revolutionize the way diseases are treated across the world. A new study conducted by researchers at Southampton University shows that just a single jab of chemotherapy may now have the potential to cure testicular cancer.

Experts at the University claim that the best weapon against one of the most widespread cancers is a single jab of the chemotherapy drug carboplatin. The drug is capable of curing early stage seminoma and men diagnosed with the disease can be successfully treated with fewer side effects.

Lead author of the study, Dr Ben Mead remarked, “Giving patients a carboplatin injection rather than radiotherapy is less unpleasant with fewer long-term risks. The initial results of the trial looked encouraging, but we needed to follow patients for another four years before we knew for sure that they had been cured.”

According to Professor Tim Oliver, from the Bart’s and the London Medical School, the upside of using carboplatin was that it treats the whole body rather than one area. Thus the small risk of another testicular cancer emerging in the other testicle was also reduced.

The study involved nearly 1,500 cancer patients. While 904 patients were given radiotherapy, about 573 were administered the carboplatin drug. A close follow up of these men showed that the rate of relapse in both groups was pretty much the same. Just about 2 of 573 patients on carboplatin experienced the spread of the cancer in the other testicle as against 15 out of 904 in the radiotherapy group.

In the course of the study, the researchers found that carboplatin not only offered a relapse rate similar to radiotherapy, but it also had fewer side effects. Experts reveal that the drug may even reduce the need for removal of the testicle in the future. The study thus concludes that a single dose of chemotherapy is the best way to cure testicular cancer in many patients.

In the present treatment patients have their affected testicle removed. They are then given either a single dose of carboplatin chemotherapy, longer rounds of radiotherapy, or can choose to have no extra treatment which puts them at a higher risk of relapse. The researchers mention that with these kinds of treatment options if the cancer is detected at an early stage, the patient along with the doctor should make the right choice.

While radiotherapy has several side effects, people who resort to the treatment of chemotherapy involving the drug carboplatin can return to their normal lives in a much shorter time frame.

Testicular cancer is diagnosed among several hundred men in the UK every year. Most of them have are seminomas, a condition that affects the sperm-producing cells in the testicle, and almost half of these are detected at an early stage.

A project of the Medical Research Council, researchers assert that the study is reassuring, and that carboplatin was indeed a better option. These findings are to be presented on Monday at a cancer conference in Birmingham.