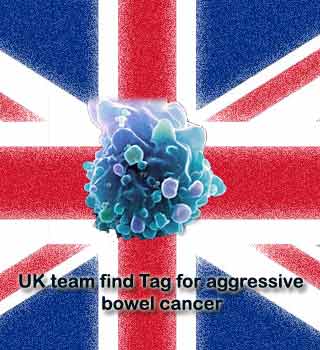 British scientists claim to have found a new test that will help predict the risks in patients with the most aggressive form of bowel cancer. Boosting survival rates, the scientists assert that the marker will be needed for treatment of the deadly disease. Diagnosed in more than 36,000 people annually and claiming 16,000 lives in the UK alone, bowel cancer is the third most common cancer.

The study was led by scientists from Durham University and the North East England Stem Cell Institute along with colleagues from The James Cook University Hospital, Middlesbrough, and the Departments of Pathology and Epidemiology at Maastricht University in the Netherlands. The UK team discovered a new insight to pinpoint the fatal disease. They suggested that the dangerous form of the disease should be treated with chemotherapy and not just surgery to remove the growth.

Professor Chris Hutchison, co-author of the study, mentioned, “We are potentially able to more accurately predict who would benefit from chemotherapy. Currently the hospitals use a standard test to work out how far the cancer has progressed and then they use this to determine the treatment the patient should receive.”

Fellow researcher, Dr Naomi Willis, remarked, “We then found that patients with tumour tissue which also carried Lamin A were more likely to have an aggressive form of the disease.”

“Chemotherapy can be very useful but can have a number of side effects, so we only want to use it where we think there’s a good chance it will help. This test will help us determine that”, added team member, Prof Robert Wilson, also a consultant surgeon and bowel cancer specialist at the James Cook University Hospital, Middlesbrough.

The team analysed tissue samples collected from 700 colorectal (bowel) cancer patients. They then kept a check on their progress. While concentrating on stem cells which are the parent cells of other types, the scientist found that they were marked out by Lamin A. It was observed that the presence of Lamin A in the tissue was more likely to lead to an aggressive form of the disease. This property is found in other cancer cells too.

Reduction of cell adhesion causes cancer cells to effortlessly spread and attack the rest of the body. Lamin A plays a significant role in doing so.

A further examination suggested that around one third of these patients will express the Lamin A stem cell marker and should be considered for chemotherapy.

The scientists figured that the detection of the Lamin A marker in the early forms of cancer will be really useful. In addition to the usual surgery that removes the tumour and some surrounding tissue, the patients should be administered chemotherapy. This the scientist reveal will certainly help in improving survival.

The development of a Lamin A-based detection test that will benefit health services is next on the list for the British team.

The findings are published in the scientific journal PLoS ONE.