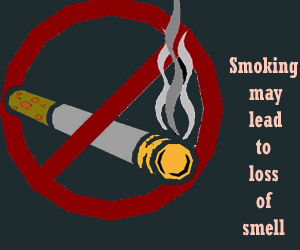 Experts from around the globe reveal a unique ill effect of smoking. Researchers found that smokers over a period of time lose their ability to smell and in some cases even the most common odours. The conclusion was drawn after two separate studies found a significant association between smoking and ability to smell.

The first study was conducted by Norwegian researchers. Comprising of about 2,294 patients, the research brought to light the fact that as compared to non-smokers, individuals who take to the cancer stick are 12-27% more likely to suffer from symptoms of obstructive sleep apnea, snoring, or nose-related issues.

Well there’s bad news for second hand smokers too. Experts indicate that they have high risks of contracting laryngitis, leading to cough, hoarseness and chronic clearing of the throat. The scientists recommend kicking the butt as an eminent therapeutic measure for patients who face upper airway ailments.

Carried out by Brazilian researchers, the second study also found a link between smoking and loss of smell. As part of the study, scientists analysed about 56 healthy volunteers. Volunteers who belonged to the current and former smoker group had higher problems in detecting the odour of butanol. The distinct and powerful smell of the alcohol gives it a wide application in odour testing. Researchers thus assert that people who can’t stay away from cigarettes are bound to suffer from altered ability to smells.

The third study was led by researchers at the University of California-Davis. Conducted on animal models, the study revealed the harmful effects of second-hand tobacco smoke. Experts believe that secondary smoke is one primary causes of a condition called ‘environmental laryngitis’.

Along with allergens and air pollution, exposure to second-hand smoke causes individuals to suffer from laryngitis symptoms like hoarseness, cough, and chronic clearing of the throat. The novel research thereby indicated that conditions in the surrounding also play an important role in developing the viral infection.

The studies were presented at the annual meeting of the American Academy of Otolaryngology-Head and Neck Surgery Foundation.