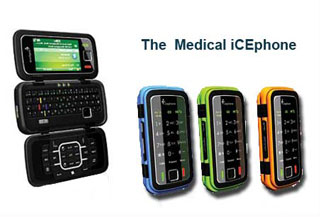 iCEphone, the recent creation of MedicalPhone, boasts of having an “in-case of emergency” button below its typing pad, which, when pressed, informs the emergency services. This multi-tasked phone was launched in UK.

This innovative handset was originally created keeping in mind the need of the British military. iCEphone is believed to be beneficial for both the consumer and medical markets. It is mainly targeted towards military and other government users.

Supposedly, other than proving to be literally a life saver, in case of emergencies, this handset also has a very unique design. It unfolds into three panels: first panel is a 3 inch touch screen display, second panel consists of a full QWERTY typing keypad, and the third has a gaming pad with multiple triggers.

It’s also being said that the iCEphone, because of its multiple uses, is known as “the Swiss Army Knife of Handsets.” The “in-case of emergency” or “ice” button permits it’s users to access satnav GPS, and along with identification it also provides a complete medical record, etc. among other things. When pressed, this emergency button is believed to send the current GPS location, inclusive of other required data to the emergency services in the area.

The iCEphone is covered with a tough exterior which boasts of surviving drops of up to 1.2 meters, as well as water and snow. It is equipped with a 3.1 mega-pixel camera with LED flash and auto-focus. The talk-time battery boasts of surviving for 5 hours, and standby time of 3 days.

The iCEphone is expected to woo the customers by hitting the market in the second quarter of 2009. The pricing is believed to be $1000.

This unique phone was introduced at the 3GSM Asia event in Macau.