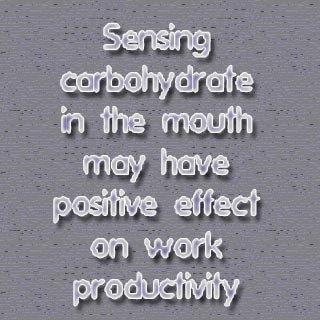 You must have witnessed innumerable people, who periodically sip from a bottle of energy drink while jogging or exercising. They resort to sipping such drinks because of the apparently known ability of sweet drinks to aid in enhancing an individual’s performance in an event requiring increased stamina. However, the process through which they succeed in doing so is not yet clear. Now a team of experts have demonstrated that sweet tasting drinks may aid in boosting the performance of an individual even without them swallowing it! Wait, if you thought that was the only interesting part of this study, you may want to continue reading further. Study investigators, Ed Chambers and colleagues have further stated that a particular flavorless carbohydrate can also succeed in boosting energy in an individual.

It is believed that since such drinks or tablets contain calories; that could in itself explain the boost in energy. However, they have stated that even if a person just rinses their mouth with such drinks, they could still get an energy boost! The next possible assumption was also ruled out, which suggested that the energy boost is because of the sugary taste of such drinks. But, it was reasoned that even if they imitate real sugars, artificial sweeteners do not play a role in boosting the energy of a person.

To determine these observations, the study investigators prepared drinks containing different types of substances. These drinks were said to either consist of a sugar (glucose), a flavorless carbohydrate (maltodextrin), or neither of these substances. Following which, artificial sweeteners were then believed to have been added to all these drinks, to make them taste similarly.

Later for the purpose of the study, the investigators provided either of these drinks to endurance-trained athletes. These athletes were supposedly asked to only rinse their mouth with either of these prepared mixtures.

The obtained results were said to have immensely astounded the experts. It was discovered that the subjects who were given either of the first two concoctions, performed 2-3 percent better as compared to the people who were given the third concoction. It was also noted that the former set of athletes relatively sustained a better approximate power output and pulse rate. In fact these improved results were obtained even though the subjects didn’t feel that they had put in more effort.

These results were explained by stating that the mysterious receptors in the mouth, other than the “sweet” taste buds, may be credited for this change. Dr. Chambers elucidates that, “Much of the benefit from carbohydrate in sports drinks is provided by signaling directly from mouth to brain rather than providing energy for the working muscles.”

For further analyzing the results, the subjects had to undergo functional magnetic resonance imaging scans. Through scans the investigators wanted to evaluate the brain activity of the study subjects after being given either of these concoctions. It was found that unlike the third mixture, the first two mixtures aimed at the regions of the brain that were linked with reward or pleasure. Thus, it is believed that this is what lowers an individual’s view of workload and therefore makes it possible for them to increase their output.

However having said this we would also like to get another news report, reported by our HealthJockey team, to the attention of our readers. This study had stated that the excessive consumption of energy drinks could prove to be harmful for people suffering from high blood pressure. Innumerable researches and studies which have been formerly conducted have highlighted the effects of a healthy diet and the benefits of keeping a regular check on our consumption of various foodstuffs.

The findings of the former study have been published in The Journal of Physiology.