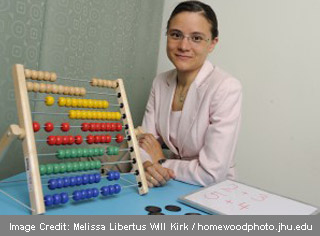 We see so many of them with a flair for writing, singing, while some may even like playing with numbers. Well, does one require an innate skill for mathematics too? A study conducted by John Hopkins university scientists, has disclosed that math ability in preschool children is strongly associated with an inborn and primary number sense known as an ‘Approximate Number System’ (ANS).

Many analysts have revealed that number sense is natural to all humans as well as animals. This sense for numbers is seen in new born infants too. As a part of the study, 200 children having median age 4 were told to perform many tasks that gauged their number sense, mathematical ability and verbal fluency. Participants were rewarded small trinkets, like stickers and pencil for their sportiveness.

“The relationship between ‘number sense’ and math ability is important and intriguing because we believe that ‘number sense’ is universal, whereas math ability has been thought to be highly dependent on culture and language, and takes many years to learn. Thus, a link between the two is surprising and raises many important questions and issues, including one of the most important ones, which is whether we can train a child’s number sense with an eye to improving his future math ability,” elaborated Melissa Libertus, a post-doctoral fellow in the Department of Psychological and Brain Sciences at the Krieger School of Arts and Sciences.

For the number sense test, kids were asked to witness sparkling sets of blue and yellow points on a computer display and to comprehend which group had more number of dots. They wouldn’t be able to count them owing to the speed of flashes and also because not all children could count easily. The preschoolers then had to answer that question verbally to the testers after which he would hit on the right button. The level of the test was sometimes easy with one set having 5 dots and the other 10. While some others were tricky like 5 yellow and 6 blue dots. They were made aware of the right answer through a high or low pitched beep.

The analysis was inclusive of many other ways of testing their flair for mathematics like number comparison, numeral literacy, number facts, calculation skills, and number concepts. These trails are usually conducted for children aged 3 to 8 years. And finally their parents and guardians were given a test where they had to reveal the word that their child has been saying. This was done as investigators feel language and math skills are inter-related though common intelligence.

The outcomes showed that the precision of the child’s estimations was apparently related to their math talent. Children who were found to make finest estimation in the dot test seemingly had good knowledge of numerals and arithmetic too. This affirmed that primitive numerical estimation capacity relates to success in school maths. This study shows that number sense and math skill run parallel even before the start of formal math instructions. This link opens up an array of questions and also paves way for better understanding of applications used in educational system.

The study is published online in a recent issue of Developmental Science.