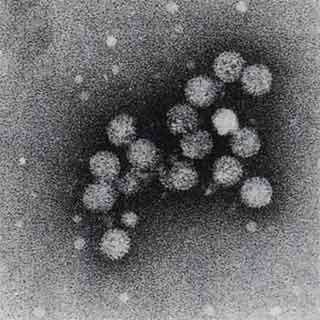 A new clinical trial says chronic hepatitis C patients, who haven’t responded to an initial round of treatment won’t benefit from the peginterferon drug used during maintenance therapy.

The ‘Hepatitis C Antiviral Long-Term Treatment Against Cirrhosis’ trial reveals that over a period of four years an astonishing drop in health levels was noticed in liver disease patients.

Hepatitis C is caused by a virus (seen in the image via epidemic.org), which is transmitted by contact with blood. This disease may initially show no symptoms. Patients suffering from this fatal disease may also get diagnosed with liver cancer or liver inflammation.

Chronic hepatitis C patients may be treated in different ways. Within a period of six months to a year, some are cured with an initial course of peginterferon and ribavirin anti-viral therapy. The remaining patients’ health may improve through this treatment; however the virus is not fully eradicated.

Study author, Dr. Adrian Di Bisceglie, chief of hepatology and co-director of the Liver Center, Saint Louis University, says that, based on the outcome of this trial, the doctors norm of treating hepatitis c patients in this manner should probably be discontinued. He says that, the maintenance therapy treatment apparently does not yield positive results.

The study analyzed more than 1000 patients in various clinical sites. The researchers divided the patients in two groups. One half was given a low dose of peginterferon for a period of three and a half years. The other half was put in a control group for about four years.

The results proved that maintenance therapy does not yield positive results; it does not curb the growth of liver disease from replicating.

At the end of the trial, about 30 percent of the patients had either developed liver cancer, liver failure or had died.

Di Bisceglie says that, unexpectedly these patients health deteriorated a lot over a period of four years. He goes on, once chronic hepatitis C patient progresses to the advanced fibrosis level; their survival chances are supposedly considered very low.

The doctors are hoping for the new drugs presently in clinical trials to have a different outcome.

This study is published in the New England Journal of Medicine.