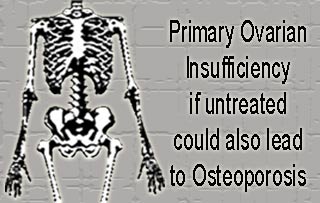 Scientists from a newly conducted study were believed to have stated that women and young girls may face an increased risk of low bone density. This criterion may evidently be applicable to those experiencing delays in diagnosing a premature, menopause-like condition, called primary ovarian insufficiency. This latest study was evidently conducted by the scientists at the National Institutes of Health.

Supposedly, primary ovarian insufficiency seems to occur in girls and women younger than 40 years of age, when their ovaries stop functioning normally. Due to this condition, they may also seem to experience infertility and even develop symptoms similar to menopause. These women may also develop symptoms akin to women having menopause, including loss of regular menstrual periods and hot flashes. Although it is believed that the symptoms of this condition may be decreased or relieved by substituting estrogen. Apparently, estrogen absorbs calcium and seems to help the bones.

According to the study experts, delays in diagnosis may be common because of irregular or stopped menstrual periods which seems to be the main symptom and is believed to most often be disregarded by women and their doctors. Purportedly, the experts found that a strong risk factor for lower bone density may be the beginning of menstrual irregularity before the age of 20.

It was apparently observed that African-American women may be more prone to having low bone density in contrast to the white-skinned women. The former group of women was believed to have a higher chance of having low vitamin D levels, because they seemed to consume lesser calcium than the latter group of women. White-skinned women appeared to be more likely to take replacement hormones prescribed as a treatment for the condition in contrast to the Asian women.

“The new study helps explain why some women with the condition are more likely to develop low bone density. It also provides strong evidence that by diagnosing the condition early, replacing deficient estrogen, and getting adequate calcium and vitamin D, these women can protect their bones from weakness and fractures.” Duane added.

The study subjects, who were believed to have entered normal menopause after the age of 40, tended to experience some amount of bone loss. However, the women who seemed to have stopped producing estrogen at an early age may have to go through worse bone loss. This theory may hold true especially for those who didn’t seem to take replacement estrogen.

Evidently, Duane along with his colleagues completed the study by stating that primary ovarian insufficiency may perhaps make women more prone to osteoporosis and fractures later in life.

Senior study author, Lawrence Nelson, M.D., head of NICHD’s Unit on Integrative Reproductive Medicine stated that, “Bone density is like a woman’s bank account of bone. The more women build up and maintain their bone density when they’re young, the better off they will be when they’re older.”

The scientists were believed to have compared about 442 patients with 70 volunteers who seemed to have normal functioning ovaries. Supposedly, it was found that the women having primary ovarian insufficiency seemed to have 2 to 3 percent lower bone density than those without the condition.

“Our research has shown that the menstrual cycle actually is a marker of general health in women.” added Dr. Nelson.

It was concluded that women with primary ovarian insufficiency could possibly benefit by eating well, exercising regularly and also taking estrogen. It was further also added that taking adequate calcium and vitamin D, either by altering one’s dietary habits or taking supplements could probably reduce the bone thinning observed in the subjects.

These findings have been presented online in the Journal of Clinical Endocrinology & Metabolism.

New method may cut down disability in premature babies with grave...