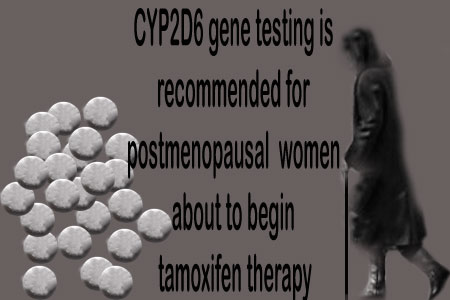 Tamoxifen is said to be a “pro-drug,” it has to, supposedly, be metabolized in the liver to become active. It is believed to be able to prevent the development of estrogen-receptor-positive (ER+) breast cancer, and also as a therapy to curb the re-growth of the ER+ breast cancer. Previous researches by the Mayo Clinic had revealed that this drug is not very efficient in postmenopausal breast cancer women, who also suffered from the CYP2D6 gene deficiency. This gene is believed to be very crucial for triggering the activation of tamoxifen and other drugs. On the other hand, apparently, presently this gene is not routinely tested in most medical centers.

Study’s lead investigator, Matthew Goetz, M.D., an assistant professor of oncology and pharmacology, Mayo Clinic, says that, “These new results validate our earlier findings, and strongly suggest that going forward, postmenopausal patients being considered for tamoxifen therapy should be tested for CYP2D6 before beginning therapy.”

This team of researchers analyzed the DNA of the post menopausal women that were treated in the ABCSG-8 study, which had earlier randomized more than 3,000 women, whose ER+ breast cancer had been surgically treated. They were randomly divided into two groups: one, to five years of tamoxifen therapy; two, two years of tamoxifen proceeded by three years of an aromatase inhibitor, anastrozole. The results of the ABCSG-8 study revealed that the women who had switched to anastrozole, had a 40 percent reduced risk of breast cancer re-growth.

The objective of this new study was to clarify whether the CYP2D6 gene would succeed in detecting the patients at an increased risk of cancer re-growth in the ABCSG-8 trial.