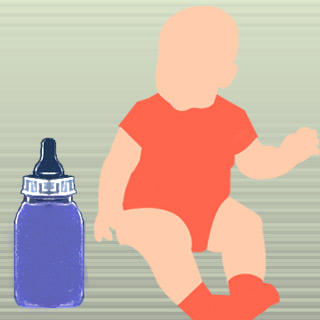 Previously we had reported of the ill effects of the chemical Bisphenol A (BPA) used in plastics, on the brain. Apart from this, an exposure to this chemical may cause reproductive issues in the offspring of pregnant mice. If this is not enough, then the findings of a new study may open one’s eye to these health dangers.

A novel study has found that the chemical BPA also seems to retard the growth of follicles of adult mice and even hampers their steroid hormone development. This study was led by Professor Jodi Flaws, University of Illinois veterinary biosciences, along with graduate student Jackye Peretz.

BPA is stated to be a toxin that is a commonly used component of baby bottles and food containers. This study is notably the first of its kind to show that chronic exposure to BPA can have the ability to hamper the effective growth and function of adult reproductive cells.

It was noted that the antral follicle which is a mature and a healthy follicle comprises of a single egg cell. This egg cell is believed to be enclosed by layers of other cells and fluids, which are instrumental in supporting the egg and also producing steroid hormones.

Professor Flaws further adds that these particular hormones are notably not only crucial for reproduction, but also for a healthy heart, bones and mood. Evidently BPA’s chemical structure is noted to be akin to that of estradiol (key steroid hormone). More so, it can even bind to estrogen receptors on the surface of some cells. However the effect of BPA on these cells is still not clear. More precisely meaning that there are still uncertainties as to whether BPA blocks, mimics or boosts the activity of estrogen on these cells.

Federal Centers for Disease Control and Prevention in 2003-04 had allegedly detected BPA in almost 93% of tested people. Apart from this, various human analyzes were also believed to have found this toxin present in the blood, urine, breast milk, the amniotic fluid of expecting mothers and also in the antral fluid of mature follicles.

Peretz explains by saying that the reason BPA was detected in so many people “probably means that we’re being constantly exposed to BPA.” Apparently, 48 hours of such an exposure seems to have the ability to affect the follicle growth. More so, 120 hours of such an exposure seemed to bring about a decrease in the three main steroid hormones, namely, testosterone, progesterone and estradiol.

Following these findings the experts have stressed on the importance of a deeper analysis on whether BPA affects the level of follicle growth and steroid hormones in human beings as well. Once this factor has been confirmed, then it could probably be of assistance in understanding certain symptoms of menopause or infertility.

The study findings will be presented at the annual meeting of the Society for the Study of Reproduction.

Green Tea may protect Bladder from getting Inflammed