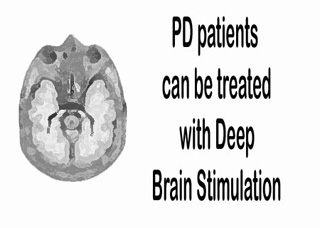 According to a latest study, advanced Parkinson disease (PD) patients, which were treated with deep brain stimulation showed an enhanced progress in movement skills and quality of life, as compared to their other medical therapy treated counterparts. However, apparently, they were also more vulnerable to grave adverse effects.

A randomized trial was conducted on more than 250 PD suffering patients. They were randomly either given the bilateral deep brain stimulation treatment or the best medical therapy. It’s stated that one fourth of the studied patients were 70 years of age or older. They state that other clinical trials have been conducted on this issue, however apparently older patients have not been a part of such studies.

Apparently, deep brain stimulation is a surgical treatment. In order to curb uncontrolled movements, electrodes are engineered which further send electrical stimulation to certain parts of the brain. The study authors state that, “However, recent reports highlighting unexpected behavioral effects of stimulation suggest that deep brain stimulation, while improving motor function, may have other less desirable consequences.”

This trial was undertaken by Frances M. Weaver, Ph.D., Hines VA Hospital, Hines, Ill., and his colleagues. These investigators wanted to evaluate and compare the effects of deep brain stimulation with other best medical therapies in PD patients.

The results revealed that deep brain stimulation patients, after a period of six months, on an average gained more than 4 hours of time per day without experiencing uncontrolled and sudden movements. The second group however, on an average didn’t show much improvement. This indicates that deep brain stimulation treatments benefited PD patient’s more than the other best medical therapies.

Having said this, it’s also said that the deep brain stimulation treatment patient’s were also at a higher risk of facing other adverse events, as compared to their other treatment-receiving counterparts. It’s stated that the deep stimulation patients faced a 3.8 fold higher risk of going through a grave event, as compared to the others. The possible serious events include nervous system disorders, surgical site infection, cardiac disorders, etc.

The study authors conclude that a deeper analysis needs to be conducted, in order to verify their results. However, they also warn that, nevertheless, PD patients and their physicians should keep in mind the risks associated with deep brain stimulation. The short term and long term effects of the treatment should be taken into consideration before the commencement of any treatment in PD patients.

Their study findings are published in JAMA.