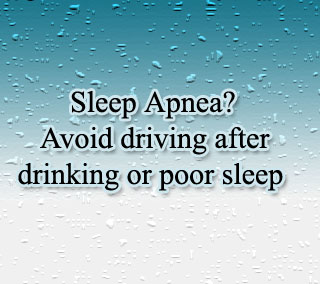 A latest research at the American Thoracic Society’s 105th International Conference in San Diego proclaimed that patients with undiagnosed obstructive sleep apnea (OSA) are at a higher risk of automobile accidents and can have lowered driving performance. Hence they should avoid driving after consuming alcohol or a disturbed sleep.

The research tried to study the effects on OSA affected people with reasonable alcohol consumption and deprived sleep in relation to their performance on a stimulated driving test. Andrew Vakulin, a Ph.D., a candidate at the Adelaide Institute for Sleep Health along with his colleagues investigated this matter.

Mr. Vakulin stated, “We found that patients with OSA had a significantly poorer performance than their peers without OSA on the driving task after sleep restriction or alcohol exposure, even though the alcohol dose was clearly within the limits imposed by most state laws—about equal to having two drinks for a woman or three for a man over the course of an hour.”

He added, “While this research could only ethically examine driving performance in a simulated setting, it raises some red flags that have strong real-world implications. In OSA patients, micro sleeps and prolonged eye closures, greater than two seconds were significant predictors of having crash incidents with adjusted odds ratios of 19.2 and 7.2, respectively. Clearly this data indicates that people with suspected or untreated sleep apnea should avoid driving if they have not had a full night’s sleep, and should avoid driving after consuming even a small amount of alcohol.”

The Adelaide Institute for Sleep Health enlisted patients with OSA following a standard diagnostic sleep study before the treatment began. A group of 38 OSA patients and 20 healthy individuals were tested and fit volunteers were randomly selected from the community via newspaper advertisements. They were grouped by age and sex.

After a normal sleep of nearly eight hours, sleep restriction of about four hours and consumption of alcohol to blood alcohol levels of about 0.05g/dL, the subjects were asked to accomplish a 90-minute mid-afternoon simulated driving course. The route taken for the driving test was a straight road with a two way lane. A night time drive by the country side was the simulated road course. There was neither approaching traffic nor traffic lights on the route with bends at an interval of 10 minute, each taking approximately 30 seconds to negotiate.

During the experiments, patients with OSA displayed lowered driving performance as compared to the 20 healthy individuals. The OSA sufferers going through alcohol exposure and sleep constraint were more prone to accidents after having restricted sleep and consuming alcohol.

Formerly the effect of OSA on the driving ability of individuals with normal drowsiness or alcohol consumption was unidentified. Driver sleepiness is already acknowledged as a reason for nearly one in three car accidents.

This study was adapted from materials provided by American Thoracic Society.

Easy Tips to Get Pregnant Fast with Yoga