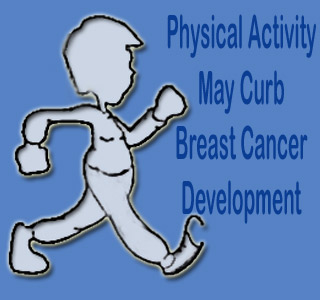 According to a latest study post-menopausal physically active women have a lower risk of acquiring breast cancer as compared to their inactive counterparts. Relatively they had a one third lesser chance of developing breast cancer according to a study conducted by the German Cancer Research Center (Deutsches Krebsforschungszentrum, DKFZ) and the University Hospitals of Hamburg-Eppendorf.

This study was conducted on about 3,464 breast cancer patients, and 6,657 healthy patients. These 50 to 74 aged women were questioned in an attempt to determine a link between lifestyle and breast cancer risk. These women had to answer questions about their amount of physical activity undertaken in two particular phases of their life; from 30 to 49 years, and after 50 years of age.

As far as the type of breast cancer influenced by physical activity is concerned, they state that physically active women stand at a lower chance of acquiring “hormone receptor positive tumors.” They were at a lower risk of getting affected by tumors that form receptors for the two female sexual hormones, estrogen and progesterone. These types of tumors were found to have affected more than 60 percent of the study participants. On the other hand, the HER2 receptor formation or differentiation stage of cancer cells was apparently not linked with the amount of physical activity.