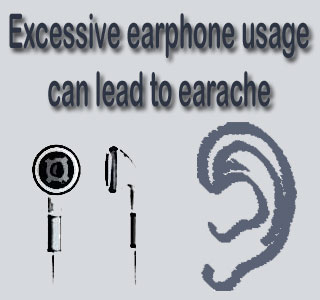 Today’s generation loves to have music at their fingertips. Youngsters usually de-stress by listening to some of their favorite music on their iPod or mp3 players. However a latest study states that regular headphone usage can increase a person’s chance of developing earache. This study was conducted by Kasturba Medical College, Manipal, India.

The regular users of iPod or other mp3 players face an increased risk of developing earache or noise-induced hearing loss problems as compared to their lesser using or non-using counterparts.

The investigators state that sharing earphones can spread bacteria from one user to another. The Staphylococcus bacteria, although said to be harmless, can be the cause of various diseases like earache or maybe even wound infection. Listening to loud music over a long period of time can have certain adverse effects on a person’s hearing ability.

A study was conducted on about 50 health medical students. They were grouped in to two groups based on their iPod usage; as frequent users and non-users. The Swab samples were taken from all the users’ ear and earphones.

The investigators suggest people to avoid sharing or borrowing earphones from one another. This causes in the spread of these bacteria.

Their study findings are published in the Online Journal of Health and Allied Sciences.