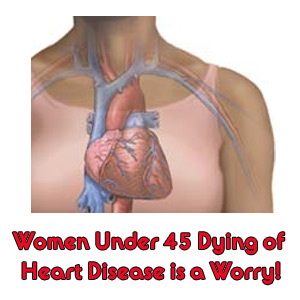 Though the U.S. death rates from coronary disease have reduced since the last two decades, ironically there is an opposite trend being observed in women in the age group of 35-44. The study is published in the Journal of the American College of Cardiology.

According to a study, in women in the ages from 35 to 44, the rate of death from coronary disease shot up by an average of 1.3 percent annually from 1997 and 2002, a finding that was statistically significant, noted Dr. Earl S. Ford, a medical officer in the U.S. Public Health Service.

Factors such as obesity, diabetes and high blood pressure are growing amongst young adults, resulting in a rise in heart related diseases.

“Young adults should take stock of their lifestyles,” Ford said in a statement. “If you’re smoking, you should quit. If you’re doing less than 30 minutes of physical activity per day, it’s time to find ways to be more active. If you need to lose weight, you should burn more calories than you take in.”

Researchers at the Centers for Disease Control and Prevention in Atlanta and Dr. Simon Capewell, of the University of Liverpool, observed U.S. coronary data from1980 to 2002.