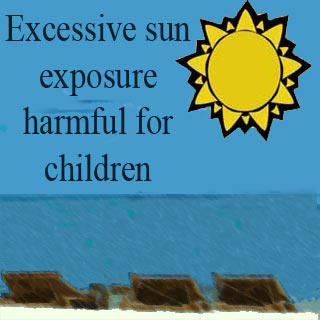 A latest study conducted on children says that vacationing at the shore may lead to about 5 percent increase in nevi or moles in young children. This study was conducted among the young children living in Colorado.

It is said that number of nevi is a highly risky element for malignant melanoma. Malignant melanoma is said to be the most dangerous form of skin cancer. The cases of such cancer incidents have been increasing over the past decades. It is estimated that annually around 62,000 Americans get diagnosed with this disease. About 8,000 people suffering from malignant melanoma succumb to their disease.

Lead author, Lori Crane, PhD, MPH, chair of the Department of Community and Behavioral Health, Colorado School of Public Health, says that, “Parents of young children need to be cautious about taking their kids on vacations that are going to be sun-intensive at waterside locations, where people are outside for whole days at a time in skin-exposing swimsuits.”

The study authors state that sometimes parents may misconstrue that sunscreens may shield their children from the harmful rays of the sun. It holds true to some extent, but an over-exposure to sun may increase the children’s chances of developing nevi. The study authors recommend parents to indulge their kids in various in-door activities and avoid letting them go outside from about 10 a.m. to 4 p.m., when the sun rays are the sharpest. Even if children have to go out, then they should consider wearing shirts with sleeves, in order to reduce the amount of direct body exposure to the sun rays.

A study was conducted on about 681 white children, born in 1998 and who were all life-long residents of Colorado. Crane says that, “Daily sun exposure at home did not seem to be related to the number of moles, while waterside vacations were. Vacations may impart some unique risk for melanoma.” A connection was noticed between each waterside vacation one or more years prior to the exam and a 5 percent increase in nevi in these 7 year old children.

It was also noted that young boys were 19 percent more vulnerable to the development of nevi, as compared to girls. This could be the case due to the fact that boys usually preferred to stay outdoors for a longer period of time as compared to girls. It was further noticed that family income was also linked to a child’s risk of developing nevi, as higher income was relatively more prone to frequent waterside vacations.

Their findings are published in the Cancer Epidemiology, Biomarkers and Prevention, journal of the American Association for Cancer Research.