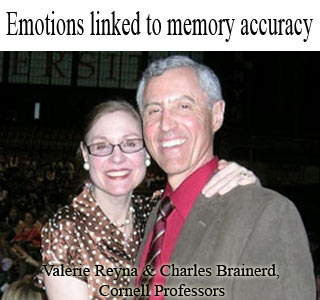 The study authors believe that their findings may be useful for determining the accuracy of legal testimonies in criminal cases. It could also be of help for conducting better interviews and interrogations in legal cases.

Brainerd states that, “You may not remember the specifics of what happened to you, but boy, do you remember it was negative. And that allows you to fill in the blanks with ‘memories’ of negative events that didn’t really happen.”

Experiments were conducted on around 120 participants. The subjects were asked to read a set of mixed words which consisted of either positive, or negative or neutral connotations. The subjects were later questioned and asked as to which of the words had been listed in the set. It was discovered that by thinking about negative words like sad, temper, rage, mad, etc. the subjects were very prone to be mistaken. They were very likely to “falsely remember” even those words, such as anger, that had not been listed. However, it was noticed that while remembering the positive words their output and memory was nearer to the truth and more accurate.

“Historically the belief has been that negative events are really pretty easy to remember, that negative emotion creates very distinctive memories. What we found was exactly the opposite. Negative information really tends to distort your memory,” says Brainerd. The authors call this phenomenon the Junior Prom Effect, since some may find their high school experience negative, but also intense at the same time.

The study authors believe that this study could form the base of various future researches on recollection of disturbing and distressing events. This study was jointly conducted by Brainerd, Valerie Reyna, his wife and a professor of human development at the Cornell University, and colleagues from Brazilian universities.

Their study findings are published in Psychological Science.