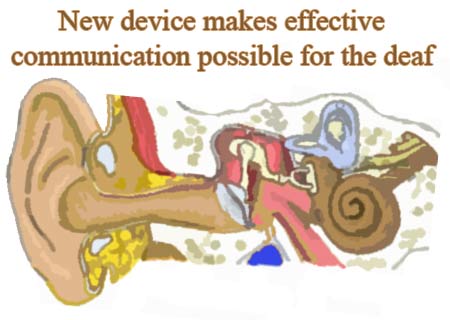 Deaf people usually communicate with others by reading their lip movements. However, a shortcoming for this essential means of communication is that certain letters or consonants like p and b may not be effectively distinguished only through sight.

To overcome this obstacle in effective communication, researchers in Sensory Communication Group from the Massachusetts Institute of Technology are trying to come up with a novel generation of tactile devices. Such devices can translate sound waves into vibrations that can be felt by the skin. These devices could be of great help in overcoming those obstacles which create a hurdle in effective communication through lip reading. These researchers hope to develop new devices which can be used by those deaf people who depend on lip reading for communication, and who can’t afford or can’t use cochlear implants.

Ted Moallem, a graduate student working on this project, says that, “Most deaf people will not have access to that technology in our lifetime. Tactile devices can be several orders of magnitude cheaper than cochlear implants.”

The project is led by Charlotte Reed, senior research scientist in the Research Laboratory of Electronics, Massachusetts Institute of Technology. It is stated that this innovative software is compatible with current smart phones, which permit the device to be transformed into unobtrusive tactile aids for the deaf.

Tactile devices translate sound waves into vibrations which permit the user to differentiate between vibratory patterns linked with different sound frequencies. These researchers are now testing devices which consist of two vibration ranges; one for high frequency sounds and one for low frequency sounds.

At present such devices are hand-held or can be worn around the neck. These devices make effective communication easier for deaf people, as compared to lip reading alone. It is stated that after the development of the novel form of this device, it can be easily integrated in the existing smart phones. It is stated that those people who own smart phones already have certain part of what is required to effectively run the acoustic processing software.

In order to come up with such devices, the researchers are attempting to figure out the best possible way to transform sound waves into vibrations.