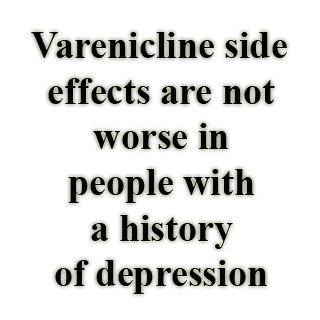 A randomized clinical trial states that people having a history of depression, who take varenicline drug, do not report of any excess side effects as compared to the other users of this drug minus any such history. This COMPASS trial was conducted by Group Health, Free & Clear, and SRI International.

Varenicline is a drug that has been FDA approved to aid tobacco users quit. This drug may also be capable of keeping heavy alcohol drinkers away from alcohol consumption. This drug in comparison with the other cessation drugs of its kind seems to be more efficient. However there has been certain unease about its resulting side effects, which include agitation, depression, and suicidal thoughts.

The present trial states that this drug does not worsen the side effects in people having a likely history of depression as compared to the others. The trial was conducted on more than 1000 Group Health patients receiving behavioral treatments and varenicline drug to quit smoking.

Lead author, Jennifer McClure, PhD, associate director for research, Group Health Center for Health Studies, says that, “People tend to feel more depressed or irritable while quitting smoking, especially if they have had depression before. And concerns have been raised that varenicline may increase neuropsychiatric symptoms including depressed mood in people with prior depression.”

This trail supported the claim regarding the common side effects of varenicline, which include nausea among others. They also stated that few weeks after the target quit date, people with potential history of depression seemed to report of side effects more often than others; however, with no more intensity as compared to the people who don’t have a history of depression.

It was also noticed that the feeling of depression and stress reduced to a certain extent in both the groups of subjects, irrespective of them having a history of depression.