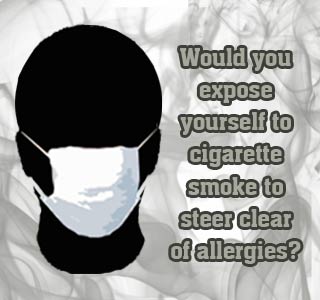 The statutory warning on a packet of cigarette stating that smoking may be injurious to one’s health may be true to the fact. Smoking could prove to be fatal in the long run. There may be innumerable data listing out the negative effects of smoking, but this deadly habit could also potentially have some not-so-bad effects as well.

According to a latest study cigarette smoke could possibly prevent the occurrence of allergies in a person. This process has been explained by stating that cigarette smoke apparently lowers the immune cells reaction to allergens and therefore prevents allergies.

This lowering of the immune cell reaction was stated to take place by hampering the activity of the mast cells. Mast cells are known to play a crucial role in the way the immune system reacts to allergens. It was alleged that the mast cells used in the study were seemingly derived from rats. However it is believed that akin to the rats even human beings may react in the similar way to allergens.

Neil Thomson, an expert in the field of respiratory medicine and member of Faculty of 1000 Biology, along with other experts have seemingly demonstrated the above mentioned effect of cigarette smoke on allergens. Supposedly they have discovered that through the introduction of a cigarette smoke-infused solution to mast cells, the reaction of allergens seemed to get restricted. This process seemed to limit the emission of inflammation-inducing proteins in reaction to allergens, without having any effect on the immune function of the remaining mast cells.

However having stated all this, it was also said that taking up smoking to rid oneself of allergies may not be a very clever thing to do!

England is among the lowest breastfeeding country in Europe