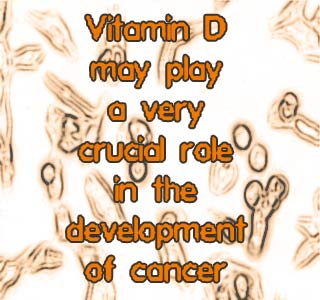 A new model of cancer development was believed to have been anticipated while evaluating vitamin D’s preventative effects. This new model called DINOMIT is stated to be quite different from the present model of cancer development. This revelation was alleged to have been made by the investigators from the Moores Cancer Center at the University of California, San Diego.

These investigators were stated to have proposed this new model of cancer development which hinges on the cancerous cells capability to cling on to each other. Although it is not yet certain, but it is believed that vitamin D may succeed in inhibiting the earliest stage of cancer by re-creating intercellular junctions in those tumors which may have an undamaged vitamin D receptor.

Epidemiologist Cedric Garland, DrPH, professor of family and preventive medicine, UC San Diego School of Medicine, says that, “The first event in cancer is loss of communication among cells due to, among other things, low vitamin D and calcium levels. In this new model, we propose that this loss may play a key role in cancer by disrupting the communication between cells that is essential to healthy cell turnover, allowing more aggressive cancer cells to take over.”

It is believed that such a cellular disruption may be credited for resulting in the initial stages of many types of cancers. Seemingly the link between vitamin D and cancer may have been evaluated and established a number of times by innumerable studies which were conducted on the topic.

Garland further explains that, “Competition and natural selection among disjoined cells within a tissue compartment, such as might occur in the breast’s terminal ductal lobular unit, for example, are the engine of cancer. The DINOMIT model provides new avenues for preventing and improving the success of cancer treatment.”

Various experts apparently presume that in a tissue, cells may cling to each other with the help of sufficient amounts of vitamin D. However in the absence of adequate amount of vitamin D these cells may no longer be able to cling to each other. Along with losing their stickiness they may even lose their differentiated-cell like character and turn into a stem-cell like state.

Allegedly vitamin D may be derived through a number of ways including through foodstuffs and supplements. Though a deeper analysis may be required to confirm these findings, the investigators have suggested people to get their level of vitamin D tested during their yearly health check-ups.

These findings were published online in Annals of Epidemiology.