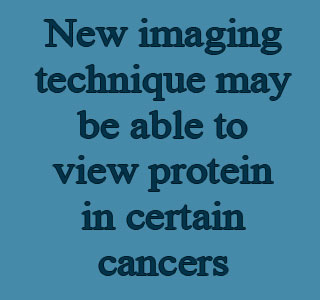 The HER2 protein, which may often be found in high levels in various cancers, may now presumably be monitored through a novel imaging technique. This non-invasive procedure could prove to be beneficial in the identification of tumors in the patients with expressed HER2. This astounding revelation was made by the investigators from the National Cancer Institute (NCI) and the National Institute of Biomedical Imaging and Bioengineering.

Notably the HER2 protein is believed to be present higher than normal levels in almost 20% of the patients with breast cancers. It was also stated that the tumors with an over-expressed HER2 may be relatively more aggressive and have a greater chance of re-appearing. These tumors may be treated with targeted therapies which specifically aim for the HER2 protein.

For this purpose the present study experts made use of an imaging compound comprising of the fluorine-18 radioactive atom attached to an Affibody molecule, which mainly binds itself to the HER2 protein. The Affibody molecule is noted to be smaller than antibodies and thus may find it easier to reach the tumor surface. It was further stated that the radioactive molecule permitted the spread of these Affibody molecules in the body to be witnessed via positron emission tomography (PET) imaging.

Senior author Jacek Capala, Ph.D., of NCI’s Center for Cancer Research, says that, “Our work shows that PET imaging using Affibody molecules was sufficiently sensitive to detect a twofold to threefold decrease in HER2 expression. Therefore, PET imaging may provide a considerable advantage over current methods. Our technique would allow a better selection of patients for HER2-targeted therapies and also early detection of tumors that either do not respond to or acquire resistance to these therapies.”

Following this, the experts also wanted to determine if they could observe the changes taking place in the expression of HER2 in response to the provided treatments. After injecting the Affibody molecule in mice with high HER2 level, they were given the 17-DMAG drug. This drug is evidently useful in lowering the level of HER2. These mice were notably screened both before and after receiving this drug. A significant reduction was observed in the level of HER2 expression than the ones who had not received the 17-DMAG drug.

This study was published in The Journal of Nuclear Medicine.