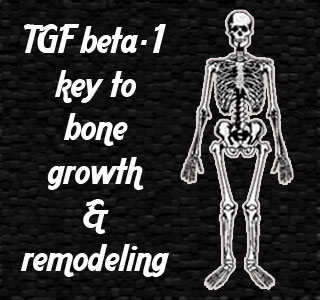 A molecular coupling factor has been unveiled which helps the bones grow and remodel themselves in order to stay strong. The link between TGF beta-1 and bone growth and bone remodeling was believed to have been made for the first time. This discovery was made by the researchers from the University of Alabama at Birmingham (UAB).

TGF beta-1 or transforming growth factor beta-1 is noted to be a human protein. This is stated to be one of the most abundant cytokines in the bone. This particular coupling molecule has apparently also been detected in various organs, which naturally go through the growth and aging process, like the liver, kidney, lung, etc.

Xu Cao, PhD, a professor in the UAB Department of Pathology, says that, “For the first time, we’ve identified TGF beta-1 is a coupling mechanism for bone resorption and bone formation. Osteoporosis, Paget’s bone disease, Camurati-Engelmann disease, and many more, all involve a bone coupling disorder to some degree.”

Bone growth and bone remodeling are stated to be a natural give-and-take system which seems to be vital to the skeletal health. Bone remodeling takes place through resorption which is notably the body’s mechanism of clearing out worn-out and brittle bones so as to avoid skeletal and bone related complications.

For the purpose of better understanding this factor, the researchers apparently assessed mice suffering from Camurati-Engelmann disease. This is a genetic disease which causes anomalies in the skeleton. These experts found that the presence of TGF beta-1 in the mice could evidently maintain a balance between bone resorption and bone formation, and thereby avoid the occurrence of fractures and worsening bone disease.

“The current treatment for many bone diseases does two things: it stimulates osteoblasts, which help form bone, and it inhibits osteoclasts, which trigger bone resorption. That’s a coupling problem, and it can lead to minimal benefit for patients. There is no drug designed to balance bone resorption with formation, and hopefully we can help change that,” explains Cao.

Apparently, few experts had earlier unsuccessfully attempted to discover a link between these two factors. The present research findings could potentially pave the way for the development of novel medications for osteoporosis and better therapies for bone-building.

These findings have been presented online in the Nature Medicine journal.