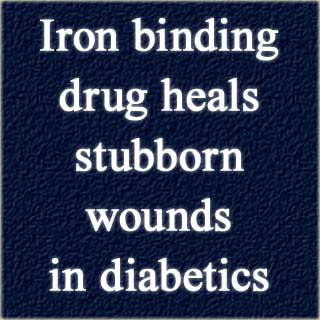 According to researchers from Stanford University of Medicine and the Albert Einstein College of Medicine, a drug which is used to remove iron from the body has the potential to fight the problem of diabetes-related poor wound healing. Apparently, poor wound healing could lead to amputation of patients’ toes, feet and even the legs.

Supposedly, blisters, cuts or pressure sores on diabetic patients’ lower limbs heal slowly or in some cases don’t heal at all. This seems to put patients at a greater risk of developing infection and amputation.

In order to better understand this criterion, researchers tested the drug, deferoxamine on diabetic mice. They discovered that the drug seem to have helped mice heal small cuts 10 days quicker in contrast to those who were refrained from the treatment.

Currently, Geoffrey Gurtner, senior author of the research, MD, professor of surgery along with his colleagues stated that the problem is a transcription factor which seems to be unable to flourish in the high-sugar environment of diabetic tissue. Apparently their prospective treatment, deferoxamine, has been approved by Food and Drug Administration for the management of chronic iron-overload disorders.

Earlier studies have claimed that increased level of glucose which is the chief symptom of diabetes is to be blamed. In order to examine this, the researchers grew healthy fibroblasts in low or high glucose environments for nearly four weeks, copying healthy and diabetic tissue. Later, they were believed to have exposed the cells to low oxygen.

The researchers discovered that cells which were grown in high-glucose saw an increased production of growth factor by only 20 percent, in contrast to 200 percent in cells grown in low glucose. The researchers were known to have conducted similar experiments with diabetic and non-diabetic mice. The findings confirmed that high glucose seems to have been constantly associated with less growth factor production in low-oxygen environments.

Gurtner stated that in order to find how the glucose hobbled growth factor production, they examined hypoxia-inducible factor-1a (HIF-1a) inside the cell. This HIF-1a is a protein which seems to work as a ‘second-to-second oxygen sensor.’ As soon as the oxygen gets low, HIF-1a connects to DNA in order to generate a cellular response containing production of vascular endothelial growth factor.

Researchers discovered that in order to function efficiently, HIF-1a should bind with a molecule called p300 and that’s where the method seems to have broken down. When cells were grown in high-sugar environments, the two molecules, apparently, lessened their binding by half.

The team selected deferoxamine, an off-patent drug which binds and removes iron from the environment. Researches in cell cultures put forward that deferoxamine seems to have brought hypoxia-inducible factor-1a and p300 back together. But still there seemed to be a doubt that it would translate to better wound healing.

For the purpose of finding this out, the researchers gave diabetic mice small cuts. Rodents, unlike people, have a thin muscle layer under their skin which permits them to pull the edges of wounds together. This makes it difficult to compare a mouse’s healing process to a human’s. To solve this problem, the researchers were believed to have attached a tiny, washer-shaped stent around the wounds. This would assist in preventing muscle contraction. They then treated some of the mice with deferoxamine cream.

“By understanding the science of why is it that diabetics generate wounds more readily and don’t heal wounds, we’re able to start to target those mechanisms,” says Gurtner.

Gurtner and Brownlee stated that the next step is to experiment the drug on human wounds. Deferoxamine at present has been observed to be given in the form of an injection. Also its appears to have side effects ranging from mild stomach upset and in rare cases it may possibly lead to serious bacterial infection.

This research has been published in the Proceedings of the National Academy of Science.