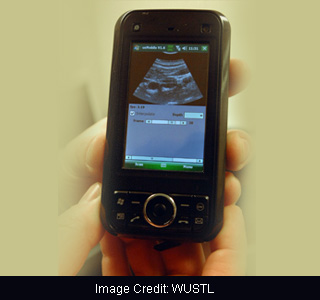 USB-based ultrasound probe technology has been united with a smartphone by a talented duo from the Washington University in St. Louis. Together these engineers have given rise to a compact, portable computational platform, and a medical imaging device. This device, which is small enough to fit in the palm of a hand, is said to have been developed by William D. Richard, Ph.D., associate professor of computer science and engineering, and David Zar, research associate in computer science and engineering.

These experts are said to have succeeded in making commercial USB ultrasound probes which are attuned with Microsoft Windows mobile-based smartphones. However, in order to succeed in doing so, these engineers had to optimize the various aspects involved in the probe design and operation. Thus, making it possible to develop smartphone-attuned USB ultrasound probes for imaging the liver, eyes, bladder etc. among others.

Richard says that, “You can carry around a probe and cell phone and image on the fly now. Imagine having these smartphones in ambulances and emergency rooms. On a larger scale, this kind of cell phone is a complete computer that runs Windows. It could become the essential computer of the Developing World, where trained medical personnel are scarce, but most of the population, as much as 90 percent, have access to a cell phone tower.”

Apart from this, the device also contains an application which may prove to be useful for those who nurse the patients suffering from Duchene’s Muscular Dystrophy. This is said to be a degenerative disease without a cure, which is believed to mostly affect young boys. The present treatments used for this disease are the use of steroids; however sometimes certain dose-related side effects take place in the patients. It was stated that, by gauging the physical changes in the muscle tissue, the effectiveness of the used drugs may be determined. Therefore, these engineers have informed that the process of measuring the muscle tissue can be taken place through ultrasound.

Zar elucidates by stating that, “The idea is that caregivers, who otherwise have to transport a young person, often wheelchair bound, to a hospital or clinic on a regular basis for examination, can be trained to do ultrasound to track muscle condition. This could lower the dosage to the least effective amount to further increase quality of life of the patient and the caregiver and hopefully extend life. We’re really excited about this application. The caregiver would only have to do a one-minute scan, transfer the data captured to the clinic, and the results would come back to the caregiver. A group at the WUSTL Medical School studying Duchene’s Muscular Dystrophy is very interested in our devices and hopes they can incorporate them into their research plans.”

It was further noted that, these engineers hope to enhance the capability of this technology by incorporating various applications in it. This particular concept of probe-smartphone has also seemingly grasped the attention of various other specialists as well.

A fully functional smartphone-attuned USB ultrasound probe was said to have been displayed at the Microsoft Research Techfest 2009. Further, this creation was even presented at the 2009 World Health Care Congress in Washington, DC.