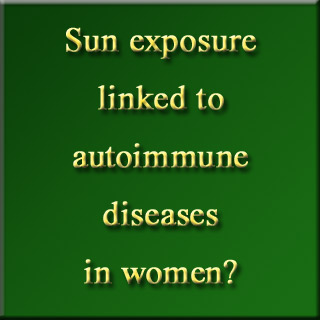 According to a novel study, ultraviolet (UV) radiation from sunlight may perhaps be associated with the development of certain autoimmune diseases. Supposedly, these diseases are mainly seen in women. This study was performed by the researchers at the National Institute of Environmental Health Sciences (NIEHS), which is a part of the National Institutes of Health.

Apparently, the study was intended to find out if there was a connection between the level of UV exposure at the beginning of the disease and the type of myositis and auto antibodies that people seem to have developed. Also, autoimmune diseases namely, dermatomyositis and polymyositis are known to be the two major forms of myositis.

In these diseases, the body’s immune system appears to attack the muscle or skin and at times other tissues. Allegedly, dermatomyositis is usually accompanied by a distinctive reddish-purple rash on the upper eyelids or over the knuckles. In addition, it frequently seems to get worse through sun exposure.

Frederick W. Miller, M.D., Ph.D., chief of the Environmental Autoimmunity Group, Program of Clinical Research, at NIEHS stated that, “This study found that women who lived in areas with higher levels of UV exposure when they developed an autoimmune muscle disease called myositis were more likely to develop the form known as dermatomyositis, which weakens the muscles and causes distinctive rashes, instead of the form called polymyositis that does not have a rash.”

Miller further explained that, “Although we have not shown a direct cause and effect link between UV exposure and this particular autoimmune disease, this study confirms the association between UV levels and the frequency of dermatomyositis that we found in a previous investigation,” said Miller.

Supposedly, this is the foremost study to have evaluated and found a probable UV radiation association in autoimmune diseases in women. Miller was of the opinion that women in contrast to men seem to be more susceptible in developing various autoimmune diseases.

Miller claimed that other experts have revealed that female mice develop more skin inflammation after UV light exposure as compared with male mice. In addition, these effects may perhaps be related to the novel findings in dermatomyositis.

For the purpose of the study, the NIEHS experts worked together with myositis centers across the country which had a record of nearly 380 patients who seem to have been diagnosed with dermatomyositis or polymyositis. Experts seemed to have determined their autoantibodies.

Miller continued saying that, “More research is clearly needed to understand the potential links between UV radiation and the development of autoimmune diseases and autoantibodies in women.”

This study has been published in the journal of Arthritis & Rheumatism.