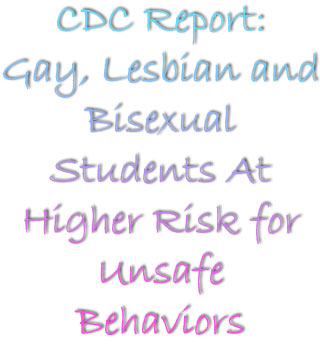 Sexual preferences have been apparently linked to many reasons, presumably even the shape of our brain, as per a report. More recently, a study conducted by Centers for Disease Control and Prevention scientists revealed that gay, lesbian or bisexual and other students with abnormal sexual preferences seem to be more likely of getting involved in risky and unhealthy behaviors like tobacco use, alcoholism, drug abuse, suicidal thoughts, sexual risks and violence.

This study spans across a wide stream of states, large urban school districts, and risk behaviors as conducted by the federal government. The report is based on the Youth Risk Behavior Surveys conducted during the period of 2001 to 2009 in seven states and six urban school districts. Extensive data associated with the students’ sexual identity and the manners of sexual contacts were gathered.

“This report should be a wake-up call for families, schools and communities that we need to do a much better job of supporting these young people. Any effort to promote adolescent health and safety must take into account the additional stressors these youth experience because of their sexual orientation, such as stigma, discrimination, and victimization. We are very concerned that these students face such dramatic disparities for so many different health risks,” explained Howell Wechsler, Ed.D, M.P.H, director of CDC’s Division of Adolescent and School Health (DASH).

As per the analysis, gay or lesbian students apparently have higher frequency rates of about 49 percent to 90 percent of all health risks. Particularly, they seemed to be more prone to 7 out of the 10 health risk categories. On the same lines, bisexual students seemingly had higher frequency rates for 57 percent to 86 percent of all health risks. They also apparently had higher rates for eight out of 10 health risk categories.

According to Laura Kann, Ph.D.,chief, Surveillance and Evaluation Research Branch, DASH, students with different sexual preferences need to feel socially, emotionally and physically safe and supported. She added that schools and communities should take concrete steps to promote healthy environments for all students like prevention of bullying, violence, and promote sexual education.

This study is known as the ‘Sexual Identity, Sex of Sexual Contacts, and Health Risk Behaviors Among Students in Grades 9–12 in Selected Sites—Youth Risk Behavior Surveillance, United States, 2001–2009’.

It was published as a Morbidity and Mortality Weekly Report Surveillance Summary.