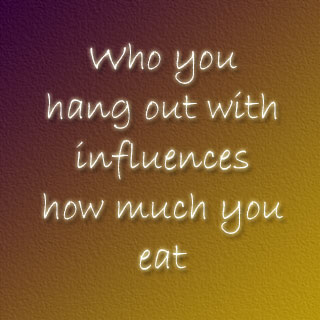 Thin friends who consume a lot could perhaps put your waistline at risk. That’s a word of caution coming from researchers at the Duke University, the University of British Columbia and Arizona State University. They were believed to have examined how other people’s weight and food choices influence how much we eat.

In order to inspect how students’ food consumption appears to be influenced by a companion, the experts utilized snack foods, obesity prosthesis, and the deception of a study related to movies.

“Obesity is obviously a tremendous public health concern. Because people often dine in social settings, we decided to investigate how someone’s size and food choices could influence how much the people around them order and eat,” says Gavan Fitzsimons, F.M. Kirby Research Fellow and professor of marketing and psychology at Duke University’s Fuqua School of Business.

The research team engaged nearly 210 college students to participate in a study apparently about movie watching. When the students arrived at a research lab, they were informed that he or she would possibly be paired with another student taking part in the same study.

In fact the other student was believed to be a member of the research team whose size was manipulated in order to make her appear to be either size 0 and 105 pounds which was her natural build or size 16 and 180 pounds. Supposedly, this size 16 seems to have been achieved when she wore the obesity prosthesis which made her look much larger. The obesity prosthesis is known to be a rubber suit.

During the analysis, the entire group of students were offered snacks so that they could enjoy them while viewing the film clip. The undercover researcher was noted to have been served first. Later, she assisted herself to either a large or small serving before the student participant was presented the same bowl of food.

Brent McFerran, assistant professor of marketing at the University of British Columbia stated that, “Most participants took a portion similar to what the researcher served herself. However, it is clear that how much food each person took, and how much they ate, depended on whether their companion was thin or obese.”

“This indicates that people are influenced, even without being aware of it, by other people’s portion choices. Further, our dining companion’s body type can lead us to adjust what we choose and consume ourselves,” elucidates Darren Dahl, the Fred H. Siller Professor of Applied Marketing Research at the University of British Columbia.

Fitzsimons further explained that, “In terms of consumer health, our findings indicate that the size of the person you dine with matters much less than the size of the meal they order. If a heavy-set colleague eats a lot, you are likely to adjust your behavior and eat less. But a thin friend who eats a lot may lead you to eat more than you normally would.”

The findings revealed that in all cases, the amount of food which the students consumed seems to have been influenced by the portion size chosen by the undercover researcher, in spite of her size.

The research findings will be soon published in the Journal of Consumer Research.