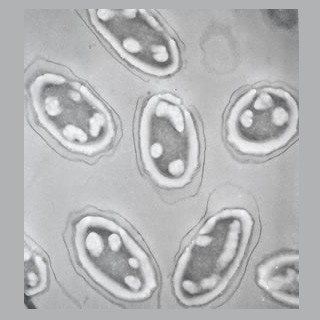 A research from Albert Einstein College of Medicine of Yeshiva University claims to have recognized two small protein fragments that may be developed into an anthrax vaccine. This novel vaccine may cause lesser side effects than the present one.

This research is vital as anthrax is thought to be a chief bioterrorism risk. The present anthrax vaccine may be proposed primarily for members of the armed forces serving in places considered high risk and for individuals involved in homeland biosecurity.

Lead author Nareen Abboud, Ph.D., an Einstein postdoctoral fellow and lead author of the research, commented, “Our research was motivated by the fact that the current anthrax vaccine has significant limitations and there is great need for a better one.”

The bacterial species Bacillus anthracis may be the reason for Anthrax. It could arise when anthrax spores which are claimed to be the microbe’s inactive stage are inhaled, ingested or pierce the body through an open wound. Anthrax is said to be a common disease among grazing animals such as cows, goats, and sheep but may also be the outcome of bioterrorism. Typical treatment post-exposure supposedly comprises of antibiotics ciprofloxacin, doxycycline and penicillin.

Anthrax may be the outcome of a part from toxic proteins, or toxins, that the multiplying bacteria may exude. The present anthrax vaccine may utilize one of these proteins, which could bring forth defensive antibodies when infused into people. However even this 40-year-old vaccine has its weaknesses. Immunity could be momentary, and about five injections over the duration of 18 months are required to maintain it. One in five vaccine recipients may develop redness, swelling or pain at the injection site, and a few may develop severe allergic reactions.

The Einstein scientists focused on the protein toxin apparently used in the existing vaccine, looking for the smallest protein sections called as peptides that may generate the production of protective antibodies when injected into animals.

The researchers apparently inserted the present vaccine into mice and found six diverse ‘pure’ strains of antibodies called as monoclonal antibodies. They then supposedly mixed every kind of antibody with the 145 peptides formed by cutting up the vaccine protein. The researchers looked for peptides that were ‘recognized by’ and bound to an antibody which may be a sign that those particular peptides may themselves be able to motivate the production of protective antibodies on their own.

Finally, the researchers discovered that about two of the 145 peptides fit the bill. Every peptide supposedly extracted antibodies when injected into mice, and these antibodies apparently sheltered macrophages from death that could have occurred when the macrophages were supposedly out in the open to anthrax toxin. Macrophages are shielding white blood cells involved in the body’s immune response to foreign intruders. The subsequent step in the research could be to inject the peptides into an animal model to see if the peptides can defend against anthrax infection.

Dr. Abboud, mentioned, “An ideal anthrax vaccine contains only the proteins needed to provide protection against disease, and none of the extraneous protein material that triggers the adverse reactions caused by the current vaccine. We’re hopeful that the two peptides that we have identified in this study can offer these benefits.”

Dr. Abboud observes that the peptides have a simple structure. One is apparently only five amino acids in length. It may mean that it ought to be effortless to synthesize the peptides and economical to create a vaccine containing them. A patent for the use of the two peptides in an anthrax vaccine will be applied by the researchers.

This research appears in the current issue of The Journal of Biological Chemistry.