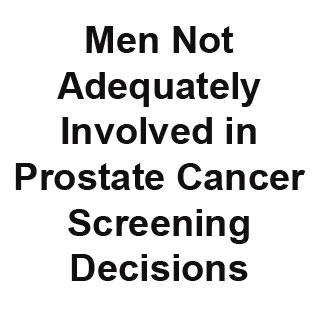 A unique study about prostrate cancer may interest a lot of men. Well this study claims that men apparently take decisions about prostate cancer screening based on conversations with their clinicians, but these discussions frequently do not comprise of information about the possibility of testing in addition to the advantages. A second study apparently uses statistical modeling to approximately calculate the gains and risks of prostate-specific antigen (PSA) screening in men of different ages and risk levels

A lot of American men older than 50 years have apparently been screened with the PSA blood test.

The authors commented, “Given the uncertain benefit for screening and known treatment risks, prostate cancer screening decisions should be guided by patient preferences. Indeed, most professional organizations recommend that the first step in screening should be a discussion between health care providers and patients about the risks and benefits of early detection and treatment so that patients can make informed decisions about whether to be screened.”

A telephone survey of about 3,010 randomly selected English-speaking adults age 40 and older was conducted by Richard M. Hoffman, M.D., M.P.H., of New Mexico VA Health Care System and University of New Mexico School of Medicine, Albuquerque, and colleagues in 2006 and 2007.

The sample apparently included around 375 men who had either undergone or discussed PSA testing with their clinicians in the preceding two years. These men were apparently asked what they were aware of prostate cancer, what their discussions with clinicians were like and what factors and sources of information supposedly determined their screening decisions.

By and large, about 69.9 percent of the men had talked about screening with their clinician before making a decision, as well as around 14.4 percent who chose not to go through testing. Frequently, 62.6 percent clinicians brought up the idea of screening, and 73.4 percent apparently recommended it.

The authors mentioned, “Although respondents generally endorsed shared decision-making process and felt informed, only 69.9 percent actually discussed screening before making a testing decision, few subjects [32 percent] reported having discussed the cons of screening, 45.2 percent said they were not asked for their preference about PSA testing and performance on knowledge testing was poor.”

It was seen that only about 47.8 percent of men correctly responded to any of three questions about prostate cancer risk and screening precision.

The authors remarked, “Therefore, these discussions-when held-did not meet criteria for shared decision making. Our findings suggest that patients need a greater level of involvement in screening discussions and to be better informed about prostate cancer screening issues.”

In a second study, a statistical model to supply information for men age 40, 50, 60 and 70 years at low, moderate and high risk for prostate cancer based on family history was supposedly assembled by Kirsten Howard, B.Sc., M.App.Sc., M.P.H., M.Health.Econ., Ph.D., of the University of Sydney, Australia, and colleagues. The authors checked two supposed associates of men who either took part or turned down annual PSA screening. This was done by means of Australian prostate cancer frequency rates before PSA screening started in 1989 and cancer death rates in 2005, along with data from the European Randomized Study of Screening for Prostate Cancer and the Australian Bureau of Statistics.

The model envisages the gains and drawbacks of annual PSA screening, which may differ with age and risk level.

In the model, screened men are said to have two to four times more chances to be detected with prostate cancer than unscreened men, but death rates from prostate cancer and from all causes are not believed to be considerably different. This apparently hints that several men whose cancer is detected by PSA screening may be going through treatment for clinically unimportant cancers.

The authors were of the opinion that even under optimistic assumptions, the net mortality benefit is small, even when prostate cancer deaths are cumulated to 85 years of age. These quantitative estimates can be used to support the goal of individual informed choices about PSA screening.

Both the studies were published in the issue of Archives of Internal Medicine, one of the JAMA/Archives.