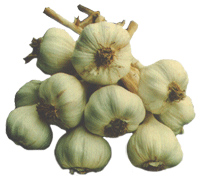 Garlic, which has been known as a wonder drug for centuries and has been used to prevent gangrene, treat high blood pressure, ward off common colds could also hold the key to preventing cystic fibrosis patients from falling foul of a potentially-fatal infection, according to a pilot study conducted by researchers.

The research will look at whether taking garlic capsules can disrupt the communication system of the pathogen Pseudomonas to prevent illness from taking hold.

The project will unite University experts in child health, respiratory medicine and molecular microbiology with clinicians at the Nottingham University Hospitals NHS Trust.

Cystic fibrosis is an inherited condition that affects around 7,000 people in the UK, half of whom are children. The disease causes difficulties in digesting food and children may be slow to put on weight and grow properly. Both children and adults with the condition are vulnerable to repeated and chronic chest infections which damage the lungs and which may, ultimately, be fatal.

Pseudomonas aeruginosa is one of the most common causes of chronic infection in CF patients. Current treatment aims to eradicate it when it first appears. If the infection becomes established it may be suppressed with antibiotic nebulisers. However, these have a major impact on quality of life for the patient because they are time-consuming (given twice a day, every day, for life) and often the patient still has to be admitted to hospital for more intensive treatment.

During the study, half the volunteer CF patients will be given garlic capsules, while the other half will receive a placebo (olive oil capsules) over a two month period. At the beginning and end of the study, researchers will measure the levels of germs in patients’ sputum samples, the patients’ lung function and weight will be monitored and blood tests carried out to ensure the garlic capsules are safe.

Dr. Alan Smyth of the University’s School of Human Development, who is leading the project, said: “The garlic components inhibit a bacterial communication system called quorum sensing (QS). This is responsible for the germ forming tenacious colonies in the lungs called ‘biofilms’. The QS molecules also switch on bacterial weapons such as ‘elastase’, an enzyme which breaks down elastic tissue in the lung.

“The beauty of this approach is that we may be able to render the germ harmless without killing it. If we use a conventional antibiotic which kills the Pseudomonas, there will always be some survivors, some of which may develop antibiotic resistance. The trick is not to allow Pseudomonas to use natural selection as a weapon against us,” Smyth added.