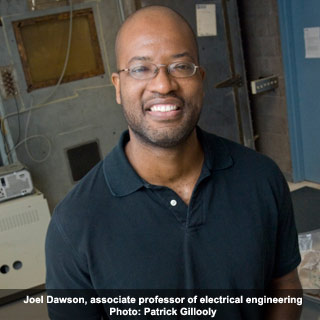 Growing technology aids doctors in several ways. Pertaining to technology, there appears to be a possible new technique to measure muscles. MIT engineer Joel Dawson and colleagues constructed a handheld probe that could assist doctors to examine muscle atrophy in patients suffering from Lou Gehrig’s Disease and similar illnesses. Dawson along with Dr. Seward Rutkove built a muscle probe that is now being examined in patients at Beth Israel Deaconess Medical Center, where Rutkove is director of the Division of Neuromuscular Disease.

Rutkove initiated the project almost a decade ago, so as to craft a simple, precise method to check muscle loss in patients with Lou Gehrig’s Disease, also called amyotrophic lateral sclerosis, or ALS. The disease is said to assault motor neurons that are in charge of voluntary muscle movement, thus resulting in muscle weakness and atrophy.

Rutkove mentioned, “Once somebody is diagnosed, we don’t have a great way of tracking the progression of the disease.”

At present there are no treatments for ALS, but precise measurement of progression of muscle loss may perhaps assist researchers to assess the efficiency of drugs in clinical trials. Gauging muscle loss may also assist doctors in finding out whether patients with treatable conditions like inflammatory muscle diseases and orthopedic injuries are reacting to therapy. Now, muscle function is apparently examined with electromyography, which needs a needle to be positioned in the patient’s muscle as the patient contracts it. It is apparently quite an excruciating technique.

Rutkove and Dawson’s probe evaluates muscle loss via electric impedance myography (EIM), which calculates muscle’s resistance to an electrical current by passing a minute, non-painful quantity of current though the muscle by two electrodes. Rutkove has discovered that examining this resistance, or impedance, in muscular atrophy patients over time may offer a precise picture of muscle loss or gain. To congregate valuable data, nevertheless, impedance ought to be calculated in numerous diverse directions across a muscle, which could be time-consuming.

Rutkove enrolled Dawson to wrap up the EIM system into a handheld device that doctors or physical therapists could effortlessly utilize in their clinics. The new device comprises of two concentric rings of electrodes, which could be selectively triggered to generate measurements in different directions, thereby removing the requirement to frequently fasten and unfasten single electrodes.

The first generation of their device apparently formed accurate measurements, but with its spiky electrodes sticking out, it did not appear to be patient-friendly. It seemed to be quite complex for a non-engineer to utilize easily. With assistance from MIT postdoctoral associate Hong Ma, the team built a smaller probe which might be easier to use, and constructed an electrode array with a flat surface instead of spikes, thereby making it more user-friendly.

Once the device is completely ready, it could be used not only to study ALS but may also assist in evaluating muscle health in patients with other disorders like muscular dystrophy.

Rutkove mentioned that NASA might find this device useful. This is because astronauts would lose muscle mass due to no gravity, but apparently there seems to be no simple technique to gauge just how much of their strength would be affected. With the probe, the astronauts could assess whether they are strong enough to carry out tasks needing strength.

Rutkove is of the opinion that he anticipates the device could be all set for commercial production within two years and could perhaps get FDA approval another year after that.