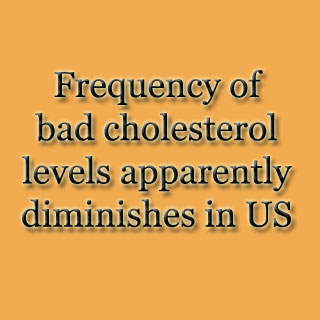 A news study claims that between 1999 and 2006, the frequency of adults in the U.S. with high levels of LDL cholesterol i.e. the ‘bad’ cholesterol, apparently reduced by about one-third. But high cholesterol levels are supposedly not being screened or treated in a high percentage of adults.

The authors commented, “The guidelines set LDL-C target levels that are based on the history of coronary heart disease (CHD) or risk for developing CHD in the next 10 years.”

Some studies have apparently explained the commonness of high LDL-C levels and the use of lipid-lowering medications across every one CHD threat group. This was given as background information.

Information from the National Health and Nutrition Examination Survey (NHANES) was used by the experts Elena V. Kuklina, M.D., Ph.D., of the Centers for Disease Control and Prevention, Atlanta, and colleagues apparently examined patterns in the incidence of screening, present use of cholesterol-lowering medication, and elevated LDL-C levels across 4 study cycles i.e. 1999-2000, 2001-2002, 2003-2004, and 2005-2006.

They supposedly limited the sample study by fasting participants who were 20 years or older. They were about 8,018 people in that category. They excluded about 464 pregnant women and roughly 510 subjects with missing data. The final study sample apparently consisted of 7,044 subjects.

The authors remarked, “However, this prevalence varied substantially by risk category. The highest prevalence of high LDL-C levels was observed in the high-risk ATP III category with 69.4 percent and 58.9 percent during the first and last cycles, respectively.”

Subjects with a self-reported history of angina, heart attack, CHD, stroke, and diabetes mellitus or participants with a fasting blood glucose level of 126 mg/dL or more were positioned in the high ATP III threat group.

It was seen that apparently no noteworthy changes were noted in the weighted age-standardized screening rates from 1999-2000 to 2005-2006. Among subjects with high LDL-C levels, around 35.5 percent were not screened, about 24.9 percent not detected, and about 39.6 percent were not treated or inefficiently treated in 2005-2006. In the high-risk group, about one-fifth of participants were said to be entitled for lipid-lowering drug therapy but were supposedly not given in 2005-2006.

The authors quoted, “Self-reported use of lipid-lowering medications increased from 8.0 percent to 13.4 percent, but screening rates did not change significantly, remaining less than 70 percent during the study periods.”

The authors added that the objective of enhancing screening rates may be delayed by the lack of agreement concerning the age at which screening ought to begin.